Shochu: A Japanese Influence on the Classic Martini 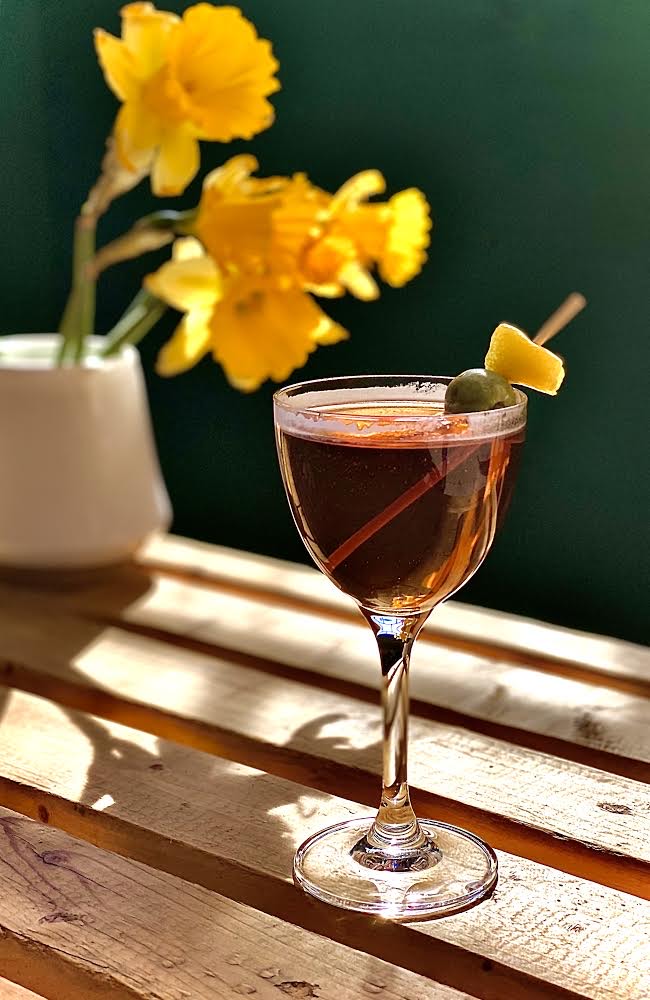 “I’ll have a vodka martini.”

What the guest actually ordered is vodka “up.” But because the expectation is that it will arrive in a martini glass, it’s referred to as a martini. Despite this technicality, we understand each other.

The reverse of this is that simply anything poured into a martini glass can be called a martini. Thousands of restaurants and bars across the United States are guilty of this. Hence the “Bubblegum-Choco-Tini,” “Pear-Ginger-Bacon-Nilla Wafer-Tini,” and “Monkey Apple-Aquavit-SoCo-Blue Raspberry-Santa Claus Marzipan Figurine-Tini.”

At a certain point, we need to ask questions about integrity and sharing a common language. To quote Walter Sobchak in The Big Lebowski, “This isn’t ‘Nam, there are rules!” But I welcome philosophical discussion, so let’s talk.

I’ll start with the most historical definition of a martini—which also has its difficulties. At a basic level though, we can perhaps agree that debates over proportions for gin and vermouth, and aesthetic discrepancies over citrus applications, is different from whether or not Strawberry Yoo-Hoo makes an appearance.

The earliest recipes for a martini call for gin, dry vermouth, orange bitters, and an olive garnish. Traditional adaptations amend gin for vodka, reduce or increase vermouth quantities, and interchange citrus twists and savory accompaniments such as olives, pickled vegetables, and brines. We are so familiar with these adaptations at this point that none of this seems radical. But there is a significant difference between a blue cheese-stuffed olive and a twist of lemon—especially in the context of cocktail culture, where a “Rum and Cola” becomes a “Cuba Libre” simply by placing a wedge of lime on the rim of the glass. Again, this becomes a question of integrity, limits, and language.

Through my experience, and in research, I’ve come to formulate my own definition of what can pass for a martini. This includes both tangible and intangible elements. With regard to the former, I’ll hold that the greatest proportion of any ingredient should be either gin or vodka, or some combination of both (as in, say, a Vesper). I also feel that it’s important for supporting alcoholic ingredients to be wine, rather than spirit based. This is what vermouth is, after all—fortified and aromatized wine. My liberal approach to this makes sherry fair game, along with other unfortified or aromatized wines (one popular martini I’ve made substituted a vintage, 1981 Chenin Blanc for vermouth).

Now, does atomizing a cocktail martini glass with absinthe or Islay Scotch breach defining boundaries? Not necessarily. My own understanding of the context here tells me that on the purest level, adding spirits other than gin or vodka in more significant proportions makes the cocktail something other than a martini. Along these lines, while additions of brine and citrus oils appropriately suit the context, syrups and juices just don’t seem sporting. My liberality does extend to garnish though: be it escargot, durian, lima beans, or limburger, it’s your cocktail. Go nuts.

As for the intangible elements I brought up, my subjective intuition tells me that a true martini involves an element of subtlety. For as many ingredients as you wish to include, a martini should first and foremost taste like a martini—that is, with the base spirit shining through, and with all other elements integrating with soft and harmonious delicacy. Of course all well-made cocktails should achieve integrative balance, but what I just described for a martini is not how Negronis function. That’s balance of a different sort. For a martini, however decadently prepared, the drinker should know, without hesitation, that this is what it is from the initial sip.

Now that I’ve established these parameters, let me dissolve them. The two martini recipes I’m including below both contain a liquor that is not wine based, and is technically neither vodka nor gin. The spirit is shochu—the most widely consumed spirit in Japan. While it’s often described as “Japanese vodka,” there are numerous differences that set it apart. Vodka typically has an abv of about 40%. Shochu, on the other hand, has a lower abv, usually averaging somewhere between 25 and 35%. Vodka can of course be made from anything distillable, though common ingredients include grain, potatoes, or fruit. As the objective is generally to achieve neutrality, vodka will often undergo multiple distillations to remove the flavor profiles of the base ingredient. Not so for shochu. Traditional base distillates for this spirit include rice, sweet potatoes, sesame, and buckwheat, which typically undergo only one distillation in order to maintain their essence in the finished product. Intensity of flavor profile naturally differs based on the taste and sensibility of the individual producer, but the best shochus I’ve had have all shared one thing in common: subtlety. The very quality I prize most in a martini.

So, does using shochu in a martini affect its integrity? To my own taste, the cocktails below maintain enough subtlety and purity of spirit to classify as martinis. I said from the start that the best art leaves more questions than answers. In the end, who’s to say?

Combine liquid ingredients in a stirring vessel. Add ice and stir until chilled and dilute. Pour into a chilled Nick & Nora glass. Express twist over the cocktail and discard. Garnish with skewered olives.

Combine liquid ingredients in a stirring vessel. Add ice and stir until chilled and dilute. Pour into a chilled Nick & Nora glass. Express twist over the cocktail, roll, and skewer along with one yuzu olive.

*To make yuzu olives and brine, cover one pint of Castelvetrano olives with equal proportions of yuzu juice and olive brine. Refrigerate and infuse overnight.