Becoming An Elephant Whisperer in Thailand 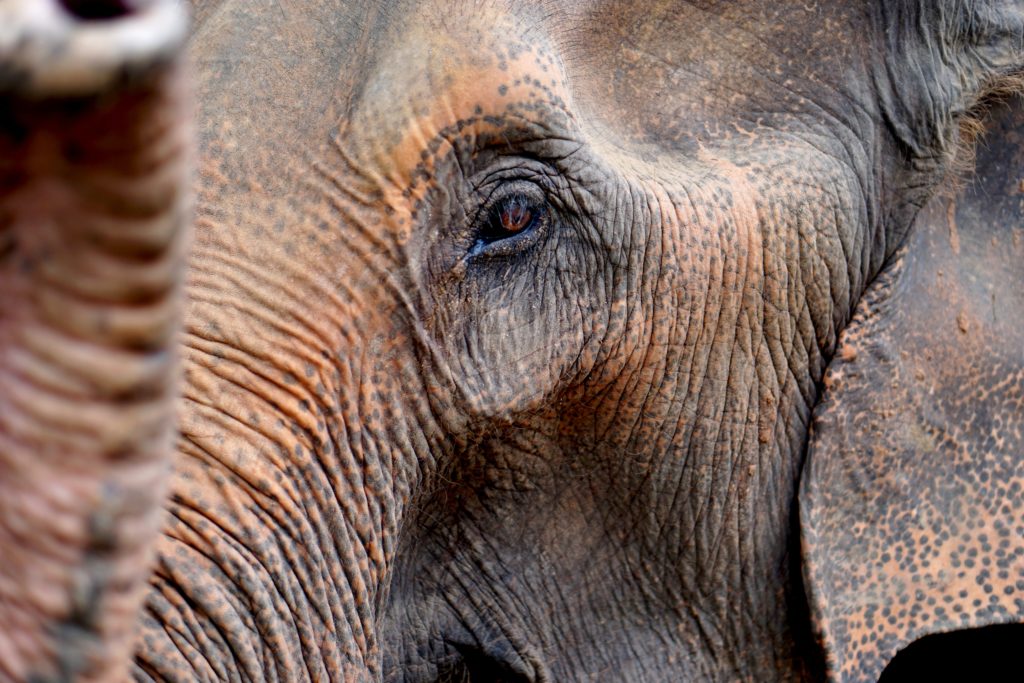 Editor’s note: Writer June Massell took this amazing elephant trip before the Covid-19 pandemic. Green Elephant and Phang Nga are temporarily closed due to Covid, although the elephants are still there and being cared for. Both will reopen when international flights and international tourism resume. Elephant Haven, Into The Wild Elephant Camp, and Elephant Conservation Center remain open for visitors. For more on where to eat, drink, and stay in Thailand, check out her article Eating Like a Royal in Thailand.

If you have ever dreamed of becoming an elephant whisperer by day and dining on amazing food at night, put Thailand at the top of your list. When you are a witness to the magic and intelligence of elephants—who know how to charm you with their droopy eyes and floppy ears—you’re in for a once-in-a-lifetime experience. There are about 4,000 domesticated elephants in Thailand and an estimated additional 3,000 living in the wild. The domesticated are primarily found in the private elephant camps or sanctuaries throughout the country.

There are about 220 elephant sanctuaries throughout Thailand. I visited four camps   and an elephant hospital. Here are some highlights from the time I spent observing and interacting with those wondrous animals whose memory, they say, is better than mine. 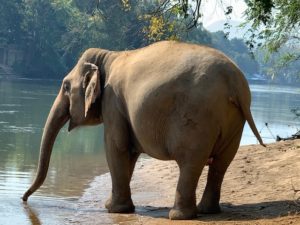 I started my elephant learning experience at the Elephant Haven Sanctuary in Kanchanburi in western Thailand. It is home to seven female elephants ranging in age from 26 to 65. In addition to feeding them and accompanying them on a walk along the River Kwai, we learned a lot about elephant food and nutrition. Elephants eat often…and a lot. In fact, they eat almost all day because they need to consume 10% of their weight in food. The average elephant weighs three to five tons. So, you do the math.

They also need a lot of exercise and are walk a minimum of four to five miles each day.  As a visitor, I was invited to participate in the food preparation. We cut up chunks of watermelon and bananas (all with the skin left on) and dug into buckets of rice dough to make rice balls that are good for their energy. They devoured everything and kept coming back for more faster than we could fill our buckets. Their massive trunks swooped in and took the food right out of our hands.

While many people think beach when they think Phuket, beautiful beaches and scenery are not the only reason to go to this island in southern Thailand. I spent a morning at the Green Elephant Sanctuary helping to feed 16 adult elephants and watching a three-day old baby practice standing, lying down, sleeping, and getting a bottle from the caretaker because the mother was having trouble nursing.  The rest of the morning was devoted to bathing elephants in a giant pond. So, I got into a bathing suit and tee shirt, put on my water shoes, and started by giving an elephant mud bath. Rubbing mud on the elephants’ backs and sides cools them off and helps regulate their body temperature.  With caretakers present, we next washed off the mud in deeper water. And finally, we followed them out of the pond and into showers with long-handled scrub brushes for the finishing beauty touch.

The Phang Nga Elephant Park is on the southern tip of the mainland, about an hour and a half drive from the Anantara Resort where I was saying on Phuket. This camp offers bathing and feeding, as well as elephant rides – which are somewhat controversial. Those opposed say it’s not good for the elephants. Those in favor say if it’s done properly, there’s no problem because the elephant weighs four tons and can easily support even a person of 200 pounds or more.  And they point to horseback riding. This particular camp doesn’t allow more than two people on one elephant and limits the ride to 15 minutes. They also don’t put metal chairs on the elephant’s back for people to sit on.

Into The Wild Elephant Camp 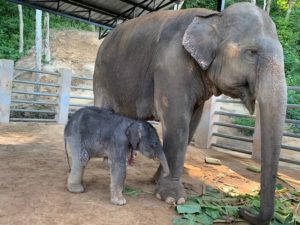 In the north of Thailand, the Into The Wild Elephant Camp is about a 2-hour drive south of Chiang Mai. I strongly suggest stopping on the way at the Mae Wang food market where you’ll find food vendors, fresh vegetable stalls, pots of tapioca boiling with sweet potatoes and 5 packets of fried buffalo or pork skins for 20 baht (about 70 cents).

Into the Wild is an awesome place to learn about these amazing, majestic and intelligent creatures. Once you get off the highway, you follow dirt roads to a very rustic jungle setting near a river that gives the elephants plenty of room to roam. The staff is primarily from the nearby Karen hill tribes. Aside from preparing food and feeding the elephants, you can walk with them through the jungle and up the nearby hills, give them a mud bath or brush them clean in the river. The caretakers are always present and serve as a guide. We fed the elephants herbal medicine balls consisting of tamarind, turmeric, banana, rice, sea salt and a mixture of Thai herbs.

While we were interacting with the elephants, the staff prepared a delicious Thai lunch in a hut with a very barebones kitchen. Lunch was served on big wooden outdoor tables overlooking the elephants playing in the water. The staff delighted in regaling us with elephant stories and teaching us about these animals. They enthusiastically demonstrated how to make the herbal medicinal balls and explained how some herbs found in nature that are used as vitamins for elephants can also be used by humans. For example, the guides suggested rubbing a piece of turmeric on top of a mosquito bite to stop the itching. And they suggested using a mixture of lemongrass and water as an insect repellant. They even demonstrated how to make a sudsy soap from tree vines found in the wild.

We learned that most of the seven elephants here had been rescued from Burma’s logging industry. And we learned something about the economics of caring for an elephant. It is an expensive proposition and the private camps depend largely on entrance fees paid by visiting tourists to survive. It costs about $18,000 per year to feed, house and care for one elephant.  Some camps say that number is on the low end because it doesn’t include medical care or the camp’s operating costs.  Elephant tourism plays a vital role in the preservation of elephants because it provides the finances that allow elephant sanctuaries to care for the elephants and help secure their future. Over the years, their numbers have declined due to poaching, deforestation and loss of natural habitat. The subject of elephant tourism is complex and has engendered a lot of debate and discussion.

For an even more in-depth understanding of elephants, consider a visit to the Elephant Conservation Center, a veterinary hospital in Lampang, near Chiang Mai. This is where you learn things about elephants you never would have thought to ask. 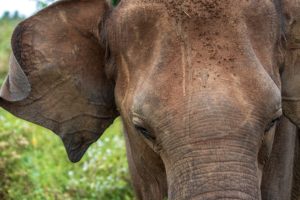 Here, sick elephants from all over the country are cared for free of charge. The government pays 50% of the costs; the rest comes from tourists and donations. The camp owners only have to pay the cost of the mahout, or caretaker, and the transportation. The Center also sponsors mobile clinics that visit elephant sanctuaries in provinces around Thailand. But when an elephant is really ill or requires special treatment or surgery, they are brought here. The Center also has training programs for mahouts, the caretakers who are the real elephant whisperers. They feed, touch, and walk them daily. They teach them verbal commands and develop special bonds. They live next to the elephants in the camps and are essentially the elephant’s best human friends.

Some elephants get serious illnesses, including cancer and can require almost a year of chemotherapy. Others need sophisticated instruments like endoscopes or need to be fed intravenously if they develop periodontal disease preventing them from opening their mouths to eat. Still others can develop osteoarthritis and severe knee pain, making it difficult to stand. The center has machines that help.  They even provide botox treatments to relieve muscle strain.

The elephant is an iconic symbol in Thailand; as you travel around the country, it is apparent how revered the elephant is. Traditionally, many people considered them sacred animals, representing the divine and symbolizing good luck. They are admired for their strength and intelligence. Visiting the elephant hospital and talking to the vets gave me additional insight into how important elephants are in Thai culture and how dedicated so many people are to preserving their future. The Thai government is actively involved the  global discussion about elephant welfare,  how to best care for them and protect them. Government agencies are sponsoring round tables and working with scientists and elephant experts to improve education, review regulations, and determine how to best enforce standards of care. 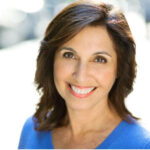