“The weekend? That’s five days away!” PRECISELY! Every Monday from now on I’ll be offering you in this space one of the amazing, food-loving wines I’ve chosen to import (after significant globe-scouring)!
The wine will take a few days to arrive at your house—so order now, and next weekend’s parties are set! Please note: I will also continue to recommend great wines to you that are not my imports…every Wednesday, right here, on WINE WEDNESDAY!

WINES for the weekend, this time! A great opportunity to sample two wines, from different generations of the legendary Toni Jost family! 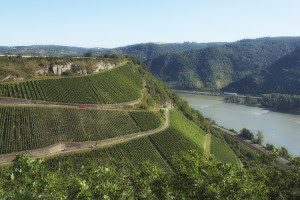 It was a really, really happy day in January 2013, when I first visited Toni Jost in the charming riverside village of Bacharach, just across from the steep cliffs of the Rheingau which sit on the other side of the Rhine River. But Bacharach, officially located in the Middle Rhein, or, as the Germans say, the Mittelrhein, has steep vineyards too! In fact, Bacharacher Hahn (the hen of Bacharach), with its Devon slate, is one of the most beautiful steep vineyards on either side of the Rhine!

So why do American wine geeks foam at the mouth about Rheingau wines, yet say virtually nothing about Mittelrhein wines just across the river? Because only the Mosel and the Rheingau got into the first English-language texts extolling the virtues of German wine! The Mosel and the Rheingau are like Bordeaux and Burgundy, reputation-wise. The old guard. Happily, we’ve all added LOTS of other French regions to the list of French wines we drink, but, unhappily, the expansion of Americans’ minds to other German regions is just beginning!

I began this expansion on that January day, in 2013, when I was greeted by Peter Jost (who has had the winery in his family for 200 years), his wife and partner Linde, and their enterprising daughter, Cecilia, who is co-winemaker now with Peter, but is in the process of taking over the winery to the delight of her proud parents! Though, there are stylistic differences between them.

Cecilia is representative of her generation, young German winemakers around 30. They’re not as enamored of the classic German style as their parents are; the light, elegant, sour-sweet tang of traditional wine doesn’t turn them on. What does turn on the young winemakers—and lots of German wine writers today, AND lots of the buying public in Germany—is a drier, more forceful style, not unlike the style of dry Alsace Rieslings.

We’ll see what the future holds for the fabulous Toni Jost winery, as the dad ages, and the daughter comes into her own—but there’s no doubt that Cecilia’s greatest success so far is the very dry, very powerful Devon-S, named for the great patch of Devon slate on which it was grown. Pale straw-green. Almost a young-in-the-cellar fermentation aroma, combining green apple and under-ripe pear, along with baked quince. Big palate, with rich alcohol impression; it is, in fact, 13%. A perfect transition wine for those used to bigger New World whites…but the singing acidity that lifts the finish is unmistakably German.

For those who prefer the older style of German wine-making…not to mention old German wines!…the great 2001 Wallufer Walkenberg, made entirely by the father, is also available! And…it was made from grapes grown across the river, in the Rheingau, Jost’s only Rheingau vineyard. So if you receive the two wines together…you also get the opportunity to compare Mittelrhein grapes with Rheingau grapes!

The Rheingau wine, the 2001 Wallufer Walkenberg Riesling Kabinett, sports a pale gold, with lots of minerally petrol, to be sure… along with flowers, yellow fruits, toasted nuts, all lending a youth and vitality to it. Slightly off-dry, but with spectacularly harmonious balancing acidity. Crisp and clean, like a bite of green apple. Long, teasing finish as fruit and acid play tag all the way down your gullet. Glorious food wine: think roast pork and red cabbage, of course, and sausages…then think a million other things (like, perhaps, my Veal, Bacon and Sausage Stew on Truffled Polenta!)

On my last visit to Toni Jost, on a wintry day, Linde prepared the family specialty: a fricasée of chicken (hen!) in a creamy mustard sauce, with gorgeous fresh noodles. It was excellent with many Toni Jost wines, but the richness of the dish paired especially well with the dry Devon-S. You can take that as a guideline when contemplating other foods for this wine: delicate ain’t so good, rich is good. I think it might reach its grandest peaks with pork—either in a simple roast, or in a rich stew. Just hold off on sugary additions…