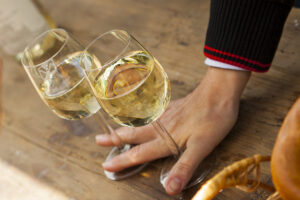 It’s been a long time coming, but Riesling is finally enjoying some well-deserved time in the limelight, thanks to the efforts of some famous Riesling enthusiasts. First, there’s restaurateur Paul Grieco, who owns two New York restaurants named Terroir; one in the tony neighborhood of Tribeca, the other on the picturesque High Line Park in Chelsea. For years, Mr. Grieco has been an ardently passionate evangelist for Riesling and has gone so far as to make Riesling the only wine served at his restaurants during the summer. He often notes that many consumers who don’t know any better fall for the myth that all Riesling wines are sweet. No less a wine world personage than Jancis Robinson MW has said many times over the years that Riesling is “the world’s greatest white wine grape.” Similar to Mr. Grieco, Ms. Robinson has lamented that Riesling “seems destined to be a minor player everywhere other than in its native Germany.” Happily, many wine lovers have either discovered Riesling or are in the process of doing so. Sweet Rieslings have continued to sell, but there has been a dramatic uptick in dry styles of Riesling, similar to the current market dynamic for dry rosés. World-class Rieslings are made in Alsace and Austria, and wines from New York’s Finger Lakes and Washington continue to trend upward in quality, but every Riesling expert knows that Germany has the finest terroir for the grape. Collectively, German Rieslings are the highest expression of the variety in the world.

The German Wine Law of 1971 established a correlation between quality level and ripeness. In opposition, top journalists and wine trade people believe this system is seriously flawed since it doesn’t set limits on yields nor account for better terroir. For many years, critics have called the designations of German wine styles needlessly complex and confusing, from QbA (Qualitätswein bestimmter Anbaugebiete) and Kabinett up through TBA (Trockenbeerenauslese). We can explore these various wine style designations in another column; the important wine style to look for is trocken (dry) because these are the most interesting, compelling and versatile wines being produced by German wine regions.

Among Germany’s numerous wine regions, the main players for Riesling are the Mosel, Rheingau, Nahe, Pfalz, and the Rheinhessen. All of these areas are in the southwestern quarter of Germany, about 280 miles southwest of Berlin and about 200 miles southeast of Munich. Each region’s vineyards are in close proximity to the main rivers that snake through the countryside. Overall, German Rieslings exhibit green apple, ripe pear, lemon, lime, and honey aromas and flavors; all underlined by bright acidity and crushed stone minerality. Interestingly, a certain petrol characteristic is more likely to be found in top-quality Rieslings made from vines with low yields than in simple wines, which come from high-yielding vineyards. Riesling’s high level of flavor compounds called monoterpenes are thought to be a contributing factor in this distinction. During the aging process, those terpenes undergo acid hydrolysis, which results in a compound with the marked aroma of petrol. 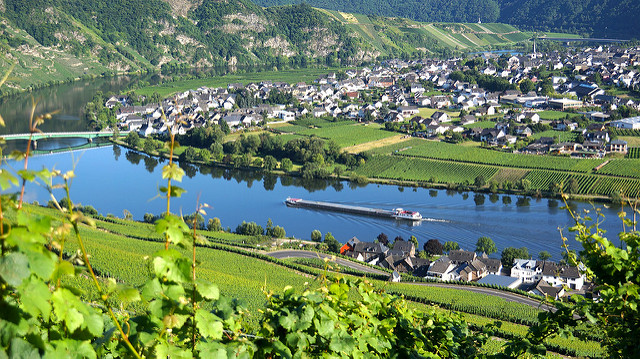 The Mosel is known for producing Riesling wines that have elegance, vibrancy, and finesse, with a distinctive racy character. Often described as “fine-boned,” Mosel wines are light- to medium-bodied, with a subtle precision and nuance in flavors on the palate that are special to this region. They typically have bright, high acidity and medium sweetness, though a greater number of dry wines are emerging. Within the Mosel’s four distinct subregions (Lower Mosel, Middle or Mittel Mosel, Saar and Ruwer), there exists a wide range of microclimates and geology. On either side of the Mosel River, these are easily among the steepest vineyards in the world and thus some of the most difficult to work. Much has been made of the Mosel’s Devonian blue slate soils, which lend mineral-driven depth to the wines; there are also gray, red and other slate soils, each of which imparts different aroma and flavor characters to the wines.
Producers to look for: Clemens-Busch, Reinhold Haart, Immich-Batterieberg, J.J. Christoffel, Egon Müller, St. Urbans-Hof, Sybille Kuntz, and J.J. Prum

Germany’s oldest region for Riesling is the Rheingau, which is also where modern-style dry white winemaking began in Germany during the 1980s. Just west of Wiesbaden, the top vineyards here hug the steep slopes north of the Rhine River. This region’s conditions help produce wines that show more assertive, expressive aromas and richer, rounder palate flavors than those from the Mosel, but have just as much depth and complexity.
Producers to look for: J.B. Becker, Schloss Schönborn, Georg Breuer, Weingut Künstler, Josef Leitz, Balthasar Ress, and Robert Weil

The Nahe’s varied geology and microclimates help produce a range of wine styles, from the elegance and finesse one would expect from a Mosel wine to the robust structure one would find in the Rheinhessen. Most of the best vines are on the west bank of the Nahe River, with some on the bank of the Alsenz River.
Producers to look for: Schäfer-Fröhlich, Helmut Dönnhoff, Emrich-Schönleber, Schlossgut Diel, K.H. Schneider, and Tesch

In southern Germany, the Pfalz has warmer conditions on average, which help produce richer wines. After the Mosel, this is Germany’s second largest area planted to Riesling.
Producers to look for: Von Buhl, Rebholz, Pfeffingen, Koehler-Ruprecht, Bürklin-Wolf, Philipp Kuhn, Müller-Catoir, and Eugen Müller

Perhaps the most interesting area that has recently emerged as a place of excellent dry Riesling is the Rheinhessen. A generation ago, this region, which is the largest wine production area in Germany, was known only for Liebfraumilch, a semi-sweet bulk wine. Most of the best vineyards are next to the Rhine and Nahe Rivers. A multiplicity of soil types (slate, clay, iron, sand, loess, and chalk) and exceptional growing conditions on average tend to impart firm minerality and serious structure to the wines.
Producers to look for: Keller, Wittmann, Groebe, Gunderloch, Kühling Gillot, and Seehof