My Favorite Wine…I Think: A Burgundy Revelation, along with a Burgundy Lesson

Now, one has a natural inclination to deflect that question, as if the questioner doesn’t understand how large the wine world is, and how difficult it would be for the well-traveled geek to make a commitment like this.

But in my most candid moments I readily admit that this is posturing…posturing on the part of us geeks! Most of us really do have a “favorite” wine, adverse though we may be to blurting it out for fear of seeming “small.”

When it comes to red wine, I would bet that a high percentage of us are actually holding the same vinous hair balls in our mouths: red Burgundy. I love it. I am seduced by it. I am willing to go bankrupt for it, as are most wine aficionados, or at least those who have enough money to go bankrupt.

And I am here today to take that geekish truism one step further. For once you answer “red Burgundy” to anyone with a shred of interest, you’re sure to be asked “Which red Burgundy?” The winos wanna know: Gevrey-Chambertin? Vosne-Romanée? Chambolle-Musigny? Great villages all, each with a fairly distinctive style. But make a village choice, and THEN they take it a step further, and start asking about your favorite VINEYARD within the villages named above, and all the other villages. The vineyard Chambertin? The vineyard Romanée-Conti? The vineyard Le Musigny? There are 35 red-wine-growing Grand Cru vineyards in Burgundy (vineyards designated as tippy-top by the government)…and the reveal-all wine confession had better be specific about these, as well.

And that’s where I’m willing to say something new, something I realized within the last few years, actually. My favorite red Burgundy is made…

…on the slopes of a Grand Cru vineyard called Corton, in and above the tiny, picturesque village of Aloxe-Corton…a village graced with one of the most beautiful Flemish roofs in Burgundy. 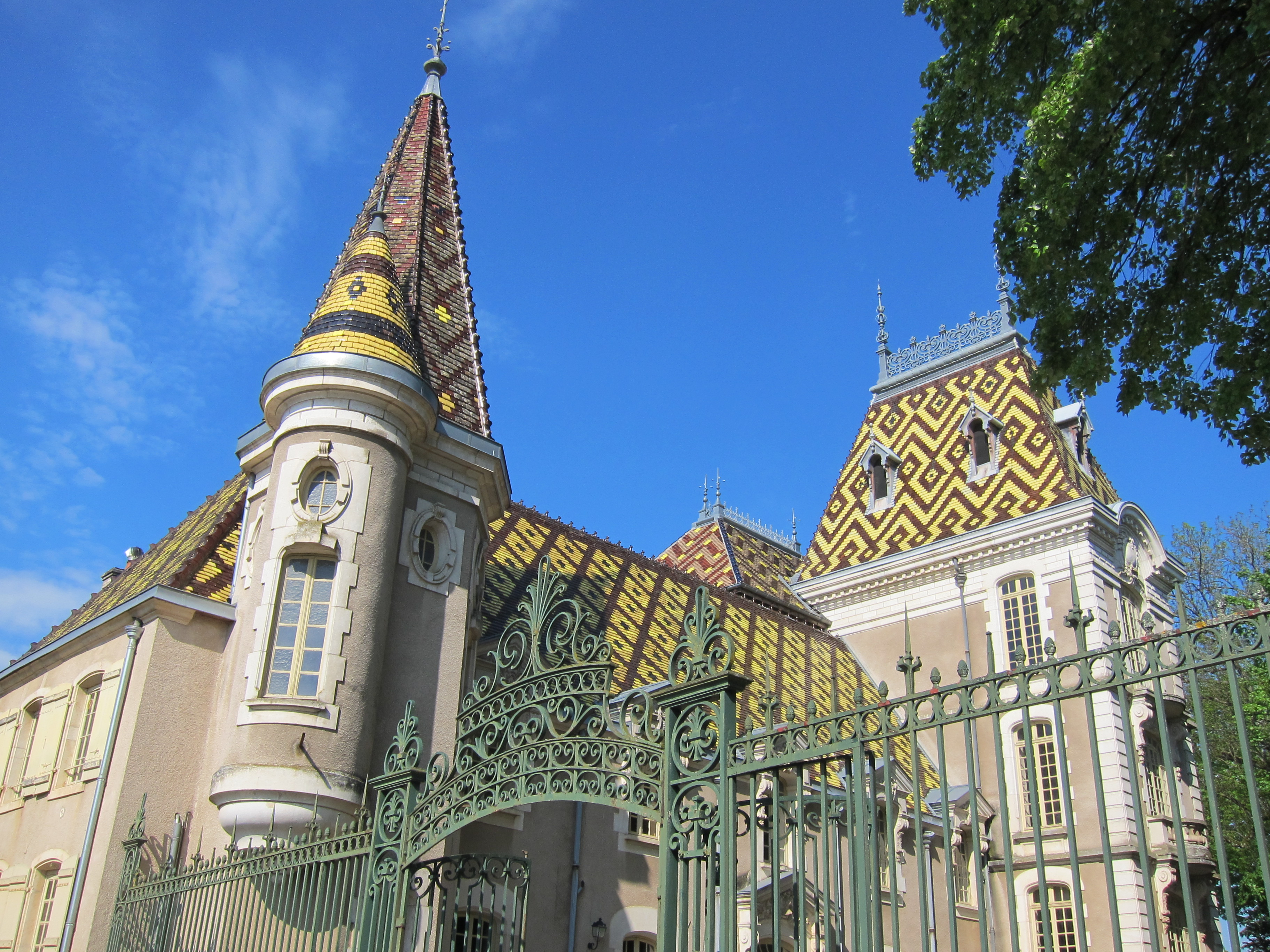 The beautiful Flemish roof of Chateau Corton-André in the heart of Aloxe-Corton, just north of Beaune

There. I said it. I’m feeling it. If you have any interest in what I’m feeling…get thee to a wine shop and see if you’re feeling it too.

The reason I’m in love with red Burgundy to begin with…is its subtlety. Its delicacy. Its refinement. Burgundy-lovers are different from Bordeaux-lovers, or Rhône-lovers, or California Cabernet-lovers; we can love the brawny juice of those other places, but we prefer the haunting, shimmering elegance of a top Burgundy. Sure the wine is lighter…but it has eddies of mystery that no other wine has.

Now, climate change being what it is, and what with the growing global taste for “big” wines, “fat” wines…red Burgundy doesn’t always seem exactly like red Burgundy any longer. It mostly depends on the producer, and his goals…but some of the Burgundy appellations these days seem to consistently make darker wine, heavier wine, wine less like the gossamer Burgundy with which I grew up.

At a tasting in New York a few months back, filled with recent vintages of red Burgundy across many appellations, the hands-down favorite for me was a Corton from Tollot-Beaut, made in 2008. Young, fruit-filled, but with classic Burgundian elegance.

On a recent trip to Burgundy, where I tasted hundreds of reds from scores of appellations over the course of five days, the favorite again was clear, amazingly: a 2000 Corton, from Phillipe Senard, seething with the ineffable complexity that is Burgundy.

Was it just a coincidence that I favored Corton twice? No. This opinion of mine has been growing for years: in tasting after tasting, it is usually Corton that seems most classically Burgundian to me, most unaffected by the style demands of a new generation.

And the enigma goes one step further: both the 2008 Tollot-Beaut and the 2000 Senard were from the same little patch of Corton, known as Corton-Bressandes.

“Corton-Bressandes?” I hear you say. “I thought the vineyard was called ‘Corton!'”

So here comes the hard part: the labelling of Corton presents the largest classification challenge in Burgundy. And I contend that the Grand Cru Corton gets less press, less praise than other red Burgundies…because people don’t understand the language of the label!

Now that I’ve coronated Corton…permit me a moment of explanation through which I will show you that Corton…along with being very wonderful…is also very simple!

Corton, of course, is in that pinnacle Burgundy category, Grand Cru—but Corton Grand Cru is a little more complicated than other Grands Crus from Burgundy.

First of all…what does Grand Cru really mean (aside from “Great Growth?”)

In most of the Burgundy villages, a few superior vineyards are designated as “Grands Crus” by the government. These wines are theoretically the best of Burgundy; what this means in red wine is cushier texture, greater concentration, more complex layers of flavors, a greater ability to age (50 years or more is not unreasonable!) If you buy a Grand Cru Burgundy—which generally costs hundreds of dollars a bottle—you will see, on the label, the name of the vineyard only. It has earned such singularity. The hyper-famous Chambertin, for example, is a Grand Cru in the village of Gevrey-Chambertin (some Grand Cru vineyards are so famous that the village has appended the name of the Grand Cru to the name of the village! Once “Gevrey,” that town is now Gevrey-Chambertin). The label does not say “Gevrey-Chambertin,” only “Chambertin.” Musigny is a Grand Cru in the village of Chambolle-Musigny. So the Grand Cru wine from Musigny is called only “Musigny,” without the village “Chambolle-Musigny” being cited.

Corton is a little different when it comes to the singularity angle. Yes, like many of the other Grands Crus, the village in which it sits has gobbled up the Grand Cru name as a PR device: Corton is in the village now called Aloxe-Corton (pronounced ah-LOSS core-TAHN), once called “Aloxe.” 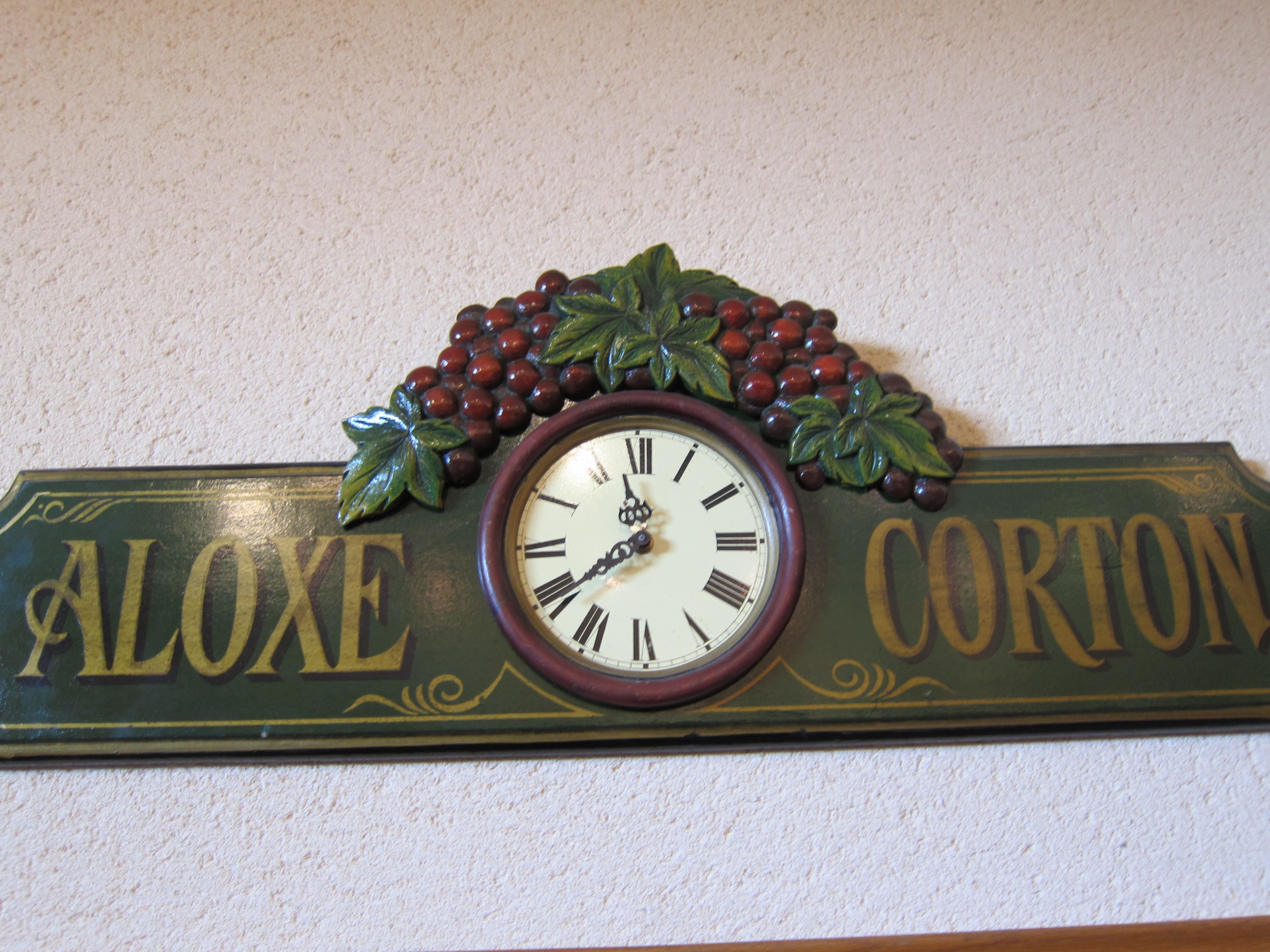 At Phillipe Senard in Aloxe-Corton

But the difference is: the label of a Corton Grand Cru can take many different forms.

For starters, Corton lies on a big hill that arises from the backyards of the 200 or so residents of Aloxe-Corton. A lot of that hill is devoted to a Grand Cru white wine, which is known as Corton-Charlemage (we’ll leave the complications of that to another day). On the western slope of that hill, mostly halfway up, sits the area that produces Corton, the Grand Cru red.

On the accompanying map, if you zoom in, you will see the expanse of Corton represented in solid purple, and a little striped purple. If you look carefully, you will see that this Corton area is broken into 24 individual subplots, each with a name.

Let’s consider the solid purple area first. Any vineyard falling in that Grand Cru area may call its wine “Corton” on the label, to make it simple for the consumer. But every individual subplot in that area, if it chooses, may name the wine with the word “Corton,” AND the name of the Corton sub-plot from which it comes. Zoom in on the map, and you’ll see a wide Grand Cru plot in the center of the slope that is called Les Bressandes. Cool. A producer who owns a piece of Les Bressandes, and produces wine from it, may call his wine EITHER “Corton-Bressandes,” OR just “Corton” itself.

A producer in the subplot Le Clos du Roi has the same option: call the wine  EITHER “Corton Clos du Roi,” OR just “Corton” itself.

Now, if a producer wants to blend two sub-plots of Corton, the sub-plot names are not permitted on the label, and the wine must be called “Corton.”

Lastly…if the grapes for red wine come from the sub-plot at the very top of the slope, just below the forest that crowns the mountain, from the purple-striped vineyard (on map) that is called “Le Corton’ (which means THE Corton)…the name of the wine must be “Le Corton.” Not “Corton.” It must be “Le Corton.” And Le Corton, of course, has the biggest reputation of all.

However, whether your wine is called Corton, or Corton-Bressandes, or 23 other hyphenated Cortons (such as Corton Les Pougets), or Le Corton…it is all considered Corton!

And it’s all considered exceptional juice by me, pretty in youth, very often capable of aging over 15-20 years into something haunting. It does, in my tasting experience, more reliably than a lot of other Grand Cru Burgundy… and, often, because of all the name confusion…at a much better price! Both of the Cortons I loved in preparing this article–the 2008 Corton-Bressandes from Tollot Beaut, and the 2000 Corton-Bressandes from Phillipe Senard–cost in the vicinity of $75 a bottle. That is extraordinary for Grand Cru Burgundy. 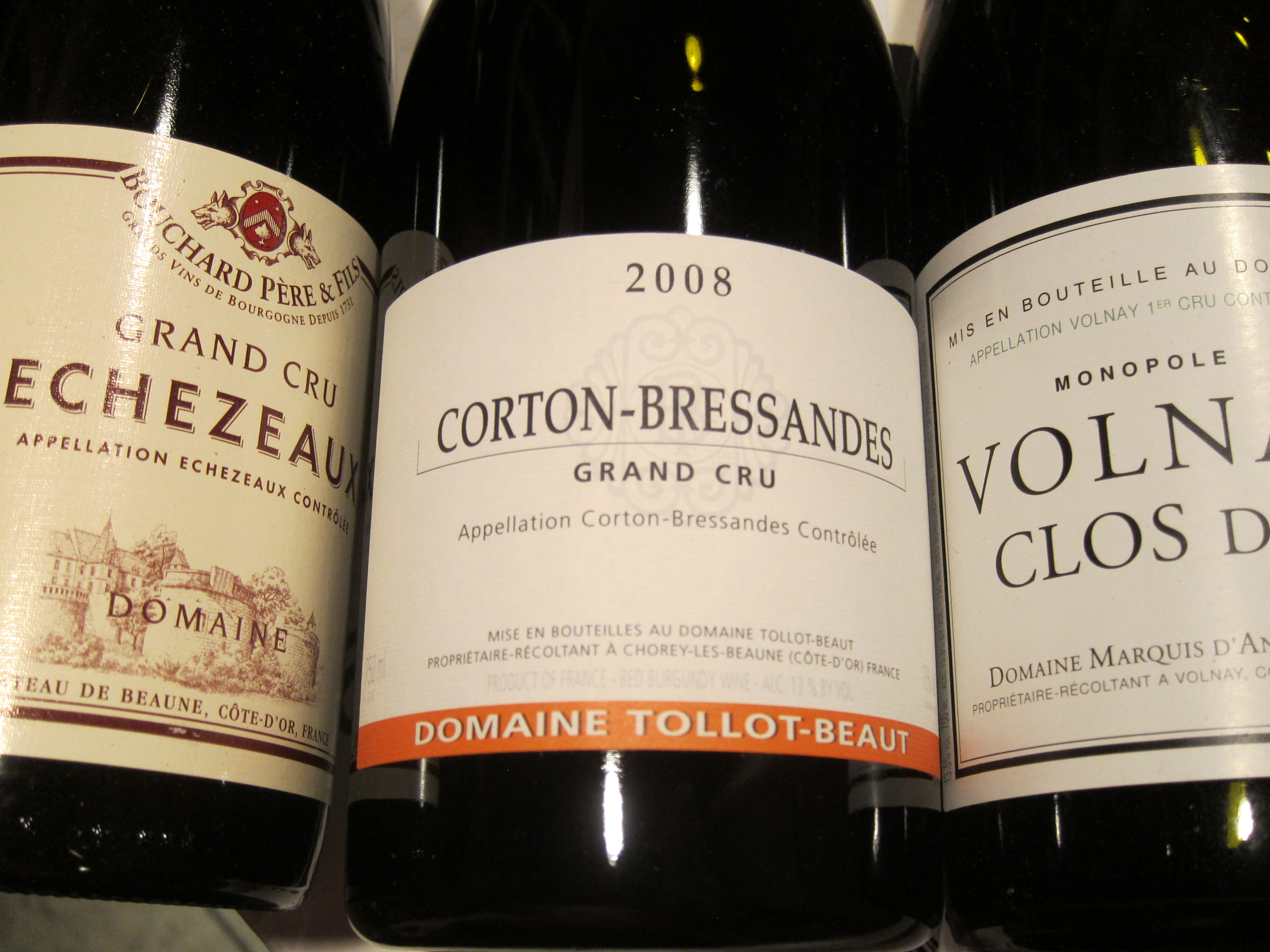 Of course, I must let the cat out of the bag. It’s really no coincidence that Bressandes came up tops for me twice. Among all the famous sub-plots of Corton, Bressandes does have a reputation as the softest and most elegant…in other words, closest to my style of Burgundy.

One way or another, if you’re serious about wine—either as a neophyte, or a long-established wine-lover—you have got to get a little Corton into your life.

If you serve it with a roast chicken…ye shall know true gastronomic bliss!