Rosengarten on Forbes: The Resurrection of Cherry Heering

As seen on Forbes.com…

In a sense, I am the living chronicle of Cherry Heering.

No, I wasn’t alive in 1818, when the cherry-flavored liqueur was first manufactured by grocery assistant Peter Frederik Suhm Heering in Copenhagen, Denmark, and shortly thereafter became a worldwide sensation, some would even say “the first global brand.” Damn, I missed the first 140 years or so.

But the last fifty years…such a turbulent era for Cherry Heering? Oh boy. I got it!

When I was a kid, growing up in New York City, Cherry Heering was one of the staples in my parents’ liquor cabinet. Mum and Dad weren’t proto-mixology types (I think the only drink that ever got mixed in my house was the Screwdriver). But like so many Old World Jews, they’d long for a lick of “schnapps” after dinner. And that’s when the deep-red stuff with the natural cherry flavor would often come out to moisten the miniature cut-glass crystal.

Then…a funny thing happened on the way to the 1970s. There were many, many cool things for kids like me to drink in the late ’60s, early ’70s hippie era, but Cherry Heering wasn’t one of them. In the minds of my Baby Boom generation…Cherry Heering was something, again, that your Mum and Dad had in their liquor cabinet while you were growing up.

For a long time in this era, Cherry Heering was not cool.

Intriguingly though, and that’s why I’m taking your time today, Cherry Heering clawed its way back and, today, is the very height of cool.

For starters, where did this mixology thing come from? Then, why did they bring Cherry Heering with them?

David Wondrich, the guru of mixology, opines that the mixology movement—in which bartenders were transformed from guys stirring drinks in seedy bars to newly-minted rock stars in glam surroundings—picked up steam “about 20 years ago. The Internet allowed many drink-minded people to talk together, all over the world, about cocktails.”

If these folks were also doing their research on the Internet, if they were looking for established classics to fire their imaginations and enrich their retro-new wave drinks…there’s nothing out there with a more glorious tradition to be discovered than Cherry Heering. It was time to forget your parents’ liquor cabinet stodginess; in the 1990s Cherry Heering, to a new generation, was suddenly coming across as a venerated classic!

You have but to start googling. The sheer number of historic royal courts that took in Cherry Heering is staggering: the Royal Danish Court in 1876; the Imperial Russian Court in 1878; the Prince of Wales in the same year; the King of England in 1901. Then there’s the history of the Singapore Sling, one of the most renowned cocktails of all time—invented at Raffle’s Bar in Singapore in 1915, and requiring Cherry Heering (along with pineapple juice, lime juice, grenadine and other things). Another early 20th-century cocktail requiring Cherry Heering is Blood & Sand, taking its name from the 1922 film starring Rudolph Valentino. Cherry Heering, within a century, had developed iconic status.

With the same bartending spirit that stood behind the Singapore Sling and Blood & Sand, modern mixologists flocked to the glam-again Cherry Heering in the 1990s. Why, other than the historic record? “It adds a lovely cherry fruitiness to a drink,” David Wondrich says, “without being too sweet or sticky. And it has a really nice acidity.”

I guess you could say it has something really important going for it as a mixer: it mixes really well.

To me, the beauty of the thing’s not just in the mixing. Completely my parents’ child, I don’t spend a lot of time mixing drinks…but the post-prandial nip is very important to me.

I had my personal reunion with Cherry Heering last spring, at a hipster bar in Brooklyn. I drank it straight, in a little glass. I was amazed.

The stuff was very serious looking—by which I mean, it had no tricked-up colors, no overwhelming visual seductiveness. In the glass, it looks like good red wine that may be 20-30 years old; it’s a mix of medium-hued garnet (NOT scary-dark) with a little encroaching brown…and the classic edge of onion skin that forms the meniscus of a good red wine. The nose is even better: cherries are olfactorily front and center, but not cliché cherries. Cherry Heering is made from a special strain of cherry: the diminutive Stevens cherry, which grows wild in Denmark, yielding the aromatic intensity that only cold-weather cherries can yield. The fruit is mixed on the nose with a jam-like dimension, a touch of prune, and an array of hard-to-nail spices that Cherry Heering holds out as a “proprietary secret.”

And then there’s the palate. If something about sweet wine is a turn-off to you, I would at least urge you to give this sweet elixir a try, for it is so much more than just a sweet drink. In fact, the world’s greatest wine connoisseurs often adore sweet wines—because their flavors and textures can be larger than life (or at least larger than wine!) In the Cherry Heering, the sweetness doesn’t seem “that” sweet—largely because it is cut by a spry, playful fruit acidity. The other thing you notice immediately is the plush texture: this is one of the most viscous, seductive spirits you’ll ever taste…but one that actually encourages you to take another sip, and another. Lastly, the explosion of flavor. The liqueur was made by aging a mix of crushed Danish Stevens cherries in neutral spirits for five years, and all that time rings true on the palate, creating a cherry-jammy-spicy-almost minty layering of exciting tastes.

My first comparative thought last spring, while tasting? “This is like drinking really great Port, but with a dazzling array of extra flavors.” 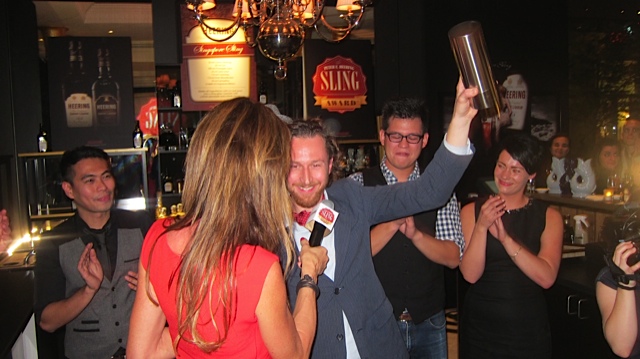 Nick Kobbernagel Hovind in his moment of triumph, in Berlin, October 2014

Of course, the mixologists who brought on this glorious modern era of Cherry Heering are not going away…and you should definitely try the fruits of their labors, as well. In fact, to make sure there are plenty of fruits, the company itself holds an annual “Sling” competition, looking for great new cocktails all over the world that include Cherry Heering. Winners have come from far and wide, and they have left their cocktail recipes for the rest of us to enjoy. In October 2014, a Bar Director from Bar Ruby in Copenhagen, Denmark—Nick Kobbernagel Hovind—won the competition with a version of the Singapore Sling that included Aquavit; it showed just how flexible Heering mixing can be.

He was trying to make a Sling that is “more European in style,” he said—a direct reference to the oft-pineappley Slings you find in Singapore. He was elated after the competition, not for his personal triumph—but because, as he said, “I’ve brought the Sling back to Denmark!”

Its ancestral home, of course.

Combine the first seven ingredients in a Boston shaker glass. Shake hard for 8 seconds. Double strain into a very chilled Palais glass. Top with soda and stir. Garnish with a lemon slice.