As I explained on Tuesday in this space, I went to Germany this week to judge an international Singapore Sling contest. Five of the best mixologists in the world went head to head here in Berlin, Heering Cherry Liqueur at the ready, to create the best contemporary version of this not-set-in-stone classic. I was part of the jury…and we picked the following recipe, by Nick Kobbernagel Hovind, of Denmark, to carry the Singapore Sling crown for 2015:

(In keeping with the international theme of the contest, the measurements are in metric units – I’ve provided approximate conversions for my American readers!)

Combine the first seven ingredients in a Boston shaker glass. Shake hard for 8 seconds. Double strain into a very chilled Palais glass. Top with soda and stir. Garnish with a lemon slice. 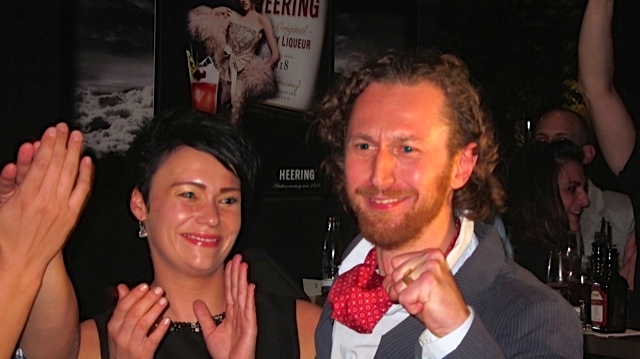 Nick Kobbernagel Hovind, Bar Manager of Bar Ruby in Copenhagen, at the moment his victory was announced in Berlin.

Nick’s Singapore Sling was by far the most flavor-layered of the group—owing in part to Nick’s almost fanatic pursuit of top ingredients (you may not be able to find the Aalborg Taffel Aquavit, but you can substitute regular Aalborg Aquavit).  He was also trying to make a Sling that is “more European in style”—a direct reference to the oft-pineappley Slings you find in Singapore. He was elated after the competition, not for his personal triumph—but because, as he told me, “I’ve brought the Sling back to Denmark!” And Cherry Heering, of course, was a Danish product to begin with.