“The weekend? That’s five days away!” PRECISELY! Every other Monday from now on I’ll be offering you in this space one of the amazing, food-loving wines I’ve chosen to import (after significant globe-scouring)!
The wine will take a few days to arrive at your house—so order now, and next weekend’s parties are set! Please note: I will also continue to recommend great wines to you that are not my imports…every other Wednesday, right here, on WINE WEDNESDAY! 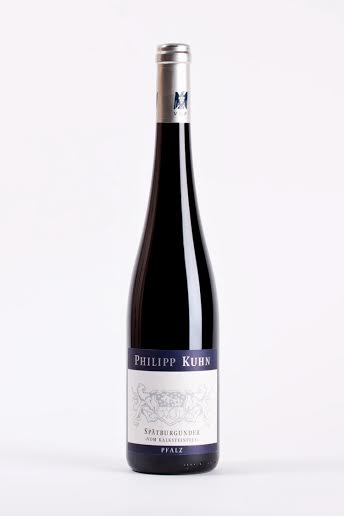 “Spätburgunder” (literally “late-ripening Burgundy”) is the name Germans use for the Pinot Noir grape. And if you haven’t tasted the Pinot Noir coming out of Germany lately…it’s time for you to get off the schneid! Once upon a time, Pinot Noir from Germany usually meant Pinot Noir from Assmanshausen…a town in the western part of the Rheingau that made (and still makes) extremely light Pinot Noir. Most adventurous wine-lovers of the 1980s knew about it, but it wasn’t the kind of Pinot Noir that drew excitement. Then, starting in the 1990s, and rising strongly in the 2000s, Pinot started taking hold in other, warmer German regions. Baden led the way, perhaps, but no regional Pinots get more international attention than the Pinots grown in a region already known by Americans for Riesling…the Pfalz (once known as Rheinpfalz, once known as the Palatinate). Finally, this was German Pinot worth shouting about. In the hands of the best producers, German Pinot shows the kind of minerality we all love in Burgundian Pinot…and shows a richness, a fruitiness, the kind of structure that’s usually only associated with higher-level Burgundian Pinot!

I was touring the Rheinpfalz about ten years ago, in the summer, seeking Riesling, of course…when I started tasting a string of incredible Pinots. I’ll never forget pulling up to the inner yard of the Philipp Kuhn winery to sit with him and taste his wines outside—precise, crystalline Rieslings, great expressions of the soil. I expected this. But my mind was really blown by his Pinot Noir, grown on limestone soil (as much red Burgundy is). I don’t think Philipp was surprised. His Pinot reputation was already lustrous in Germany; his Spätburgunder is often mentioned by Germany’s top “gourmet” magazine, Feinschmecker, as the best in Germany. And tall, handsome Philipp—scion of a Pfalz wine-making family that goes back centuries—is a rock star in the German press. So when I asked him if he was exporting his Pinot to the US, he said, “No…I haven’t really thought about it.” Why should he? He sells all he wants to an adoring European market! But I met with him a few times in Germany after that, always gently pressing my American agenda and, starting in 2012, my import company, Golden Ram, began bringing in Philipp Kuhn wines, including his great Spätburgunder.

This 2009 is big and purple, with explosive amounts of Pinot-like red fruits, like cherries and plums. But with a few years of bottle age its toast has intensified, and it has picked up crazy Burgundy-like minerals…along with a quality akin to Tootsie Roll chocolates! I love it! It has Burgundy Grand Cru weight, but with the crisp mark of a cool-climate wine all over it. Voluptuous, round finish. And it’s so delicious with food, as German wines often are! My favorite match is with long-cooked meat: stews, braises, oven-roasts that go beyond medium-rare.