Gumbo for the Holidays!

I am a gumbophile (yes, I love filé powder in my gumbo, but that’s another story!)

When I go to New Orleans (which is as often as possible)…one of the foods high on the “must-hit-up” list is gumbo. Maybe Mr. B’s Bistro serves my favorite…but there are an insane number of great gumbos in and around New Orleans.

Equally insane is the paucity of great gumbo in and around New York City. Sure, ever since Cajun food heated up nationally in the early 1980s (mostly thanks to the recently deceased Paul Prudhomme), a string of “NOLA,” or “Cajun,” or “Louisiana” restaurants have opened their doors in New York City. But…and please correct me if I’m wrong…not a one of them has become a NY institution. Not a one of them serves a gumbo that goes on every local’s list, and visitor’s list, as something to seek out in New York City.

There was a ray of light last year, on the menu at Birds & Bubbles, a terrific NYC spot on the edge of Chinatown. Chef Sarah Simmons, Southern-born, turns out a killer version of the titular headliner…in other words, fried chicken. The list of Champagnes (and other sparklers) is also one of the best in the city. But Simmons’ sultry secret is her gumbo: even if it weren’t topped with cracklins it would still be my top gumbo discovery in New York. Problem is: I can’t find it on the current internet menus for Birds & Bubbles. Oh my gawd! Did they pull it?

I didn’t lose any sleep over this, but…with the disappearance causing some residual consternation…I perked up especially brightly, last Saturday night at dusk, walking through the Columbus Circle Holiday Market. For lo and behold!…there was before me a stall named “The Gumbo Brothers.” And the aromas coming out of the soup cauldrons brought me back to Looosiana, I gar-on-TEE! 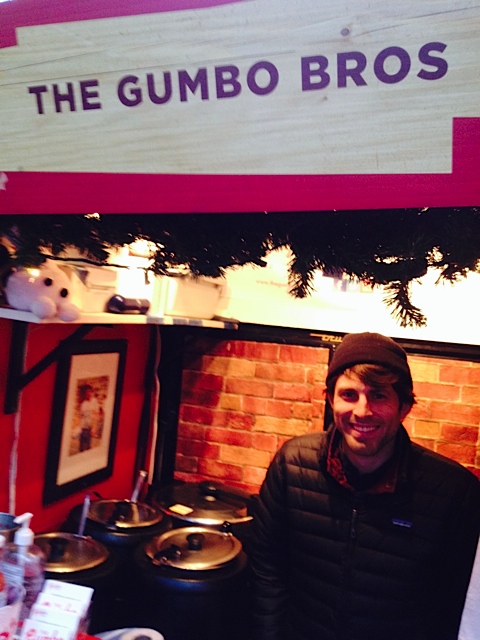 Even though dinner was looming…what could I do? I ordered a cup of the first gumbo on the list, “Nanny’s Cajun Gumbo,” and found it the perfect Christmas food! The air was nippy, and the rich, dark, spicy gumbo brought a glow to La Systeme Rosengarten. It was heart-warming, to be sure…but a lot more than my heart was warmed. There was a spiritual satisfaction as well…because I’d just found the best gumbo I’d ever tasted in New York City.

The company is run by two Louisiana natives who met as students at Louisiana State University; The Gumbo Bros is a New-York-based caterer, occasionally making its gumbos directly available at various pop-ups. That’s exactly what I happened upon Saturday night. But hurry, if you want this incarnation: the booth will only be open until Christmas Eve.

You’ll find three gumbos: Nanny’s Cajun Gumbo, Frenchmen Street Creole Gumbo (made with shrimp and okra), and the Voodoo Vegan Gumbo (a take on Gumbo Z’Herbes, made with black-eyed peas and collard greens).

I tasted only the first, but I’ll be back before Christmas. For sure. The wonderful Nanny’s Cajun Gumbo is based on a recipe from the great-grandmother of Adam, the cooking partner. It features a dark, long cooked roux—leading to a dark, long-cooked soup, with the nutty flavor of the dark roux imprinted on a meaty background. It teems with shredded chicken, surrounding the plentiful chunks of andouille. Served over rice in the traditional Cajun manner (if you want the rice), it is thick, viscous, ragin’ with Cajun spice. It tastes EXACTLY like Bourbon Street…the good places!

You can get more info at their website:
thegumbobros.com

And you can reach the very affable Clay Boulware by e-mail at clay@thegumbobros.com.