Michelin Taketh Away, and Michelin Giveth Back: The Height of Absurdity! 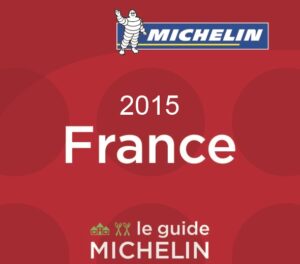 On January 30, 2015, I had an incredible meal at Alain Ducasse in Paris, at his three-star restaurant at the grand Plaza-Athénée hotel. But there was concern in the land. I discovered that the next Michelin guide to Paris was coming out three days later, on Monday, February 2nd…and that Michelin wasn’t happy with the radical changes Ducasse had recently made at this restaurant. There was talk of losing the third star, and getting knocked back to two—a crisis for any three-star restaurant, because the diminution of interest and revenue that would follow would be immense.

I wrote to you that weekend, on this site, letting you know the tragedy, possibly, that was about to befall.

Monday arrived, and the third star went out with the garbage. As of February 2, 2015, Alain Ducasse at Plaza-Athénée was a two-star Michelin restaurant.

Until this week. On Monday, February 1, 2016, the new annual Michelin guide to Paris was released. Only two restaurants in Paris were moved into the charmed circle of three stars…and one of them was Alain Ducasse at Plaza-Athénée.

I spoke to food friends in Paris immediately. “Did the Plaza-Athénée change something?” I asked. “Did they address what Michelin perceived as weaknesses in 2015, and shore them up?”

The answers came back: “Nothing changed. Nothing at all.”

Power corrupts, Lord Acton once said. It’s hard to imagine the all-powerful Guide Michelin acting in such a mercurial fashion. “We’ll take away the third star this year.” And then, “Uhhh, we’ll put it back.”  Careers are made, lives are ruined on decisions such as these. Michelin was always a tower of consistency; it once took many years for a three-star rating to change.

But then, of course, there’s Michelin and Ducasse. They’ve messed with his mind before. In 2016, as they were “honoring” the Plaza-Athénée restaurant…they also took away the third star of his other luxury Paris restaurant, at Le Meurice. I was there last year too: it was magnificent. Back in the early 1990s, when Ducasse had the audacity to rattle the very framework of Michelin, by opening great new restaurants in many places, they also freaked out. One year, in the mid-1990s, they gave him some new stars in Paris…but took away the third star from Le Louis XV in Monte Carlo, Ducasse’s best restaurant of the day.

What the hell is going on here?

I don’t know…but I’ll be in Paris soon…eating three-star food and asking questions!

I thought you might be interested in seeing the piece I posted on Forbes last February, just after Michelin knocked Alain Ducasse at Plaza-Athénée down to two stars. It is filled with outrage…and descriptions of great food!