In my opinion, the well-respected red Michelin Guide to France just goofed, making one of its most egregious errors ever earlier this month.

When their new Michelin Guide to French restaurants appeared on Monday, February 2, 2015, they dropped a star from one of Paris’ finest three-star restaurants, Alain Ducasse at Plaza-Athenée—turning it into a merely mortal two-star. The restaurant had recently undergone a re-design, a seismic menu change, and a general re-conceptualization. So it was time for Michelin to speak.

I was there for lunch on Friday, January 30, 2015, a few days before the announcement, while the restaurant was still officially a Michelin three-star. I was dazzled by my experience. I looked forward to having this impression confirmed by the in-print preservation of three stars that would surely appear three days later, in the next Monday’s publication of the 2015 Michelin…for this was clearly NOT a two-star restaurant. In fact, this was a three-star restaurant pointing the way to the future of three-star restaurants in France.

But Black Monday arrived, and to Michelin…non! For reasons that have me suspicious, they insist that this isa two-star restaurant.

(Before we go further, may I point out that all the fuss over two-star/three-star is highly warranted in the world’s most analyzed gastronomic country. In 2015, there are only 26 three-star Michelin restaurants in France—making each one a kind of national monument, a place where gastronomic travelers MUST go. Two-stars also stir up excitement, but not as much; there are 80 two-stars throughout France in 2015, and no one ever sets out to visit every two-star. For the restaurants, the differences in revenue…and prestige!…are enormous.).

There has long been suspicion that Michelin, which claims to hold food above all else when deciding on a restaurant’s stars, sometimes has their judgment clouded by “fanciness.” I have spoken to restaurateurs in France (like the great Husser family of Le Cerf in Marlenheim, near Strasbourg), who have been told that their restaurant “can never rise above two stars, no matter how good the food…this is a two-star kind of place.” The late Bernard Loiseau once showed me at his restaurant in Saulieu, Burgundy, his elaborate, $6 million renovation plans, blueprints and all…the mere existence of which provoked a Michelin jump to three stars, he believed, after having shown the plans to Michelin inspectors.

And the word going around gastronomic Paris this early weekend in February…was that Michelin was upset. Upset by the lack of tablecloths at the renovated Alain Ducasse.

I’m sure their complaint standing behind the “demotion” goes deeper than that. But I did also hear that they thought the food was “fantastic.”

What Ducasse and colleagues saw at the Plaza-Athenée, and executed, is a bold re-visualization of the three-star restaurant. 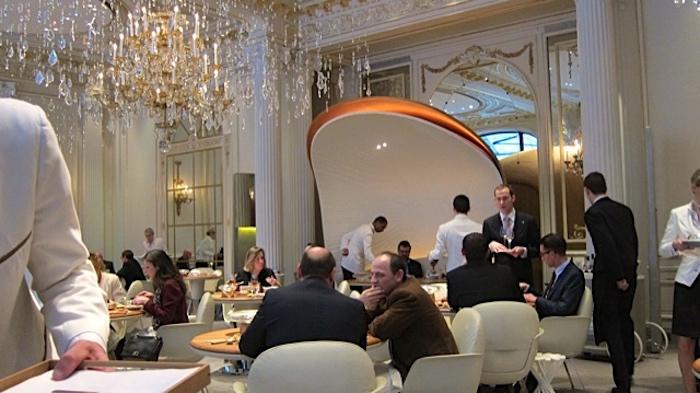 The new Alain Ducasse at the Plaza-Athenée

As you can see above…yes, there are no tablecloths on the round, blonde-wood tables. The white chairs have a meeting-room…even kindergarten!…look to them. These tweaks are set against the vestiges of the old design: the gorgeous, wide-spreading chandelier, the classic moldings, the Versailles-like mirrored panels.

As if to bring it all together, they added two major things:

1) The bizarre-but-beautiful, almost futuristic shell (like a cross-section of a bean) under which one party may sit (in the photo above, the one party is, I believe, a local restaurant critic). Can you say “pyramid at the Louvre?” Yet another famous juxtaposition of styles. 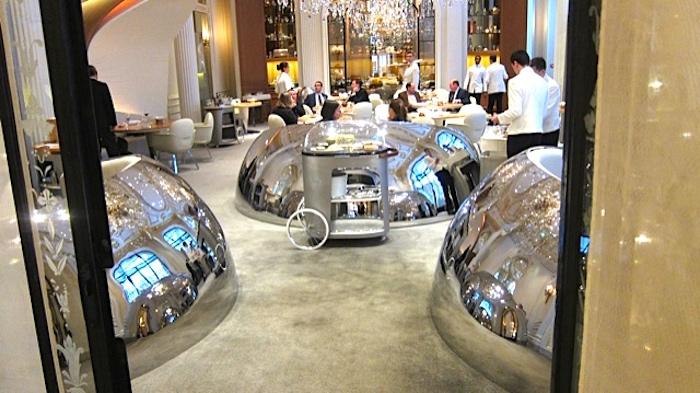 2) A good deal of potential table space is taken up by three gleaming installations just past the restaurant’s front door. Nobody has a name for these metallic half-rounds, but the manager told me they are intended to look like “cloches”…those steel domes placed over hot dishes to keep them warm, then ceremoniously removed at table.

I thought immediately of Ducasse offering the diner a box of fountain pens at some of his three-star restaurants, so the diner may choose one with which to sign the bill. Ducasse was sometimes criticized as “pretentious” for this…but I know that ain’t the case. I know the man. As with the up-front giant cloches…Ducasse, above all, is playful!

In this case, he attempted to create a three-star environment that had never been seen before. Yes, there are elements of the old luxury…but the world is moving on. And because it’s a less formal world we live in, France’s best restaurants don’t have to look exactly like a vision of France frozen in 1890! Yes, of course, many Michelin restaurants have a modernity in their designs. But I would argue that not one I know of is as deeply radical as this one, as deeply dedicated to shaking up the old three-star club.

Take a look at something as simple as slicing bread in the dining room. Here’s a view of it from Le Meurice (also a Ducasse-led restaurant inside a luxury Paris hotel): 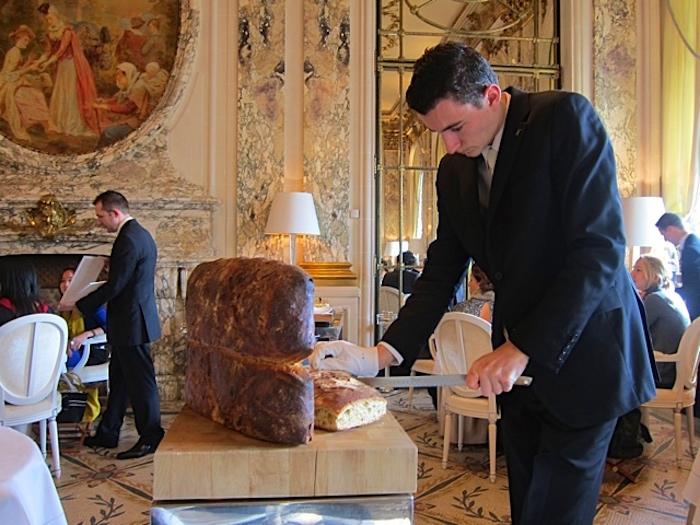 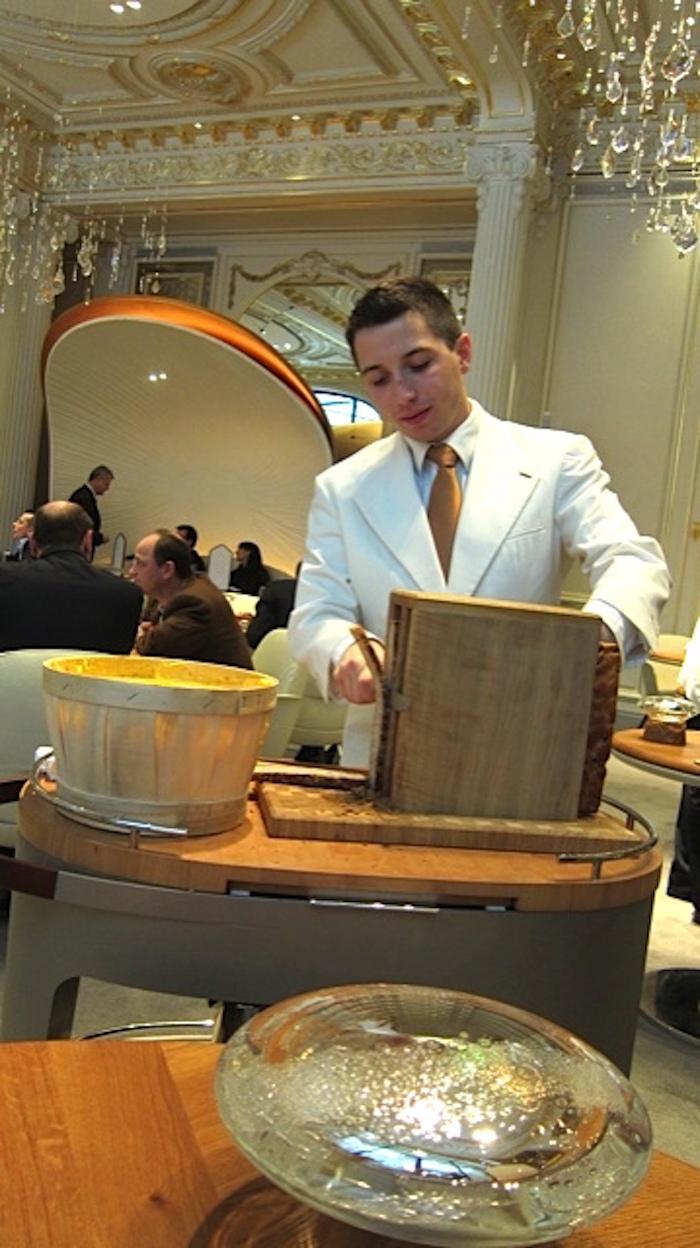 And here’s a look at cutting bread in the new two-star Alain Ducasse at the Plaza-Athenée:

Cutting bread for table at the Plaza-Athenée

Give the bread a rustic wooden frame for cutting, put it next to a country tub of butter…choose a shorter waiter in a white jacket!…and you too can lose a Michelin star! But I’m here to tell you that the bread was just as good at Alain Ducasse (even better, in fact!)…and the experience was just as thrilling.

Now, when the bread gets to the table, we start to see exactly what game Ducasse is playing.

The theme is picked up in the disparity of tableware items: 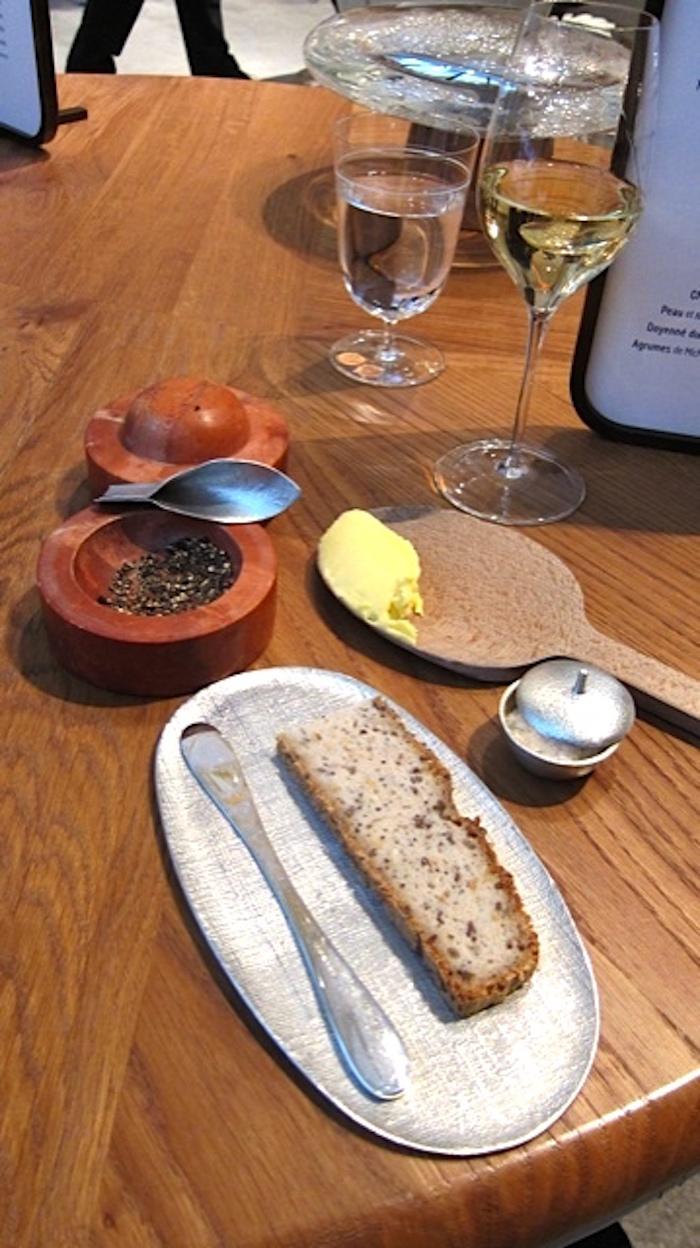 Believe it or not…there are six different table items being used here to serve a slice of bread!…ranging from the smear of great butter on an oddly-shaped mini-wooden-paddle, to the terra cotta black pepper holder, to the industrial-metal oval itself that holds the bread slice.

Viewing this, against the backdrop of Louis XIV chandeliers and a sci-fi sliced bean, pulls it all into focus: the world today is a riot of styles and materials. Can not a man of extreme taste and vision arrange many of them together under one roof, suggesting a new elegance for 2015? 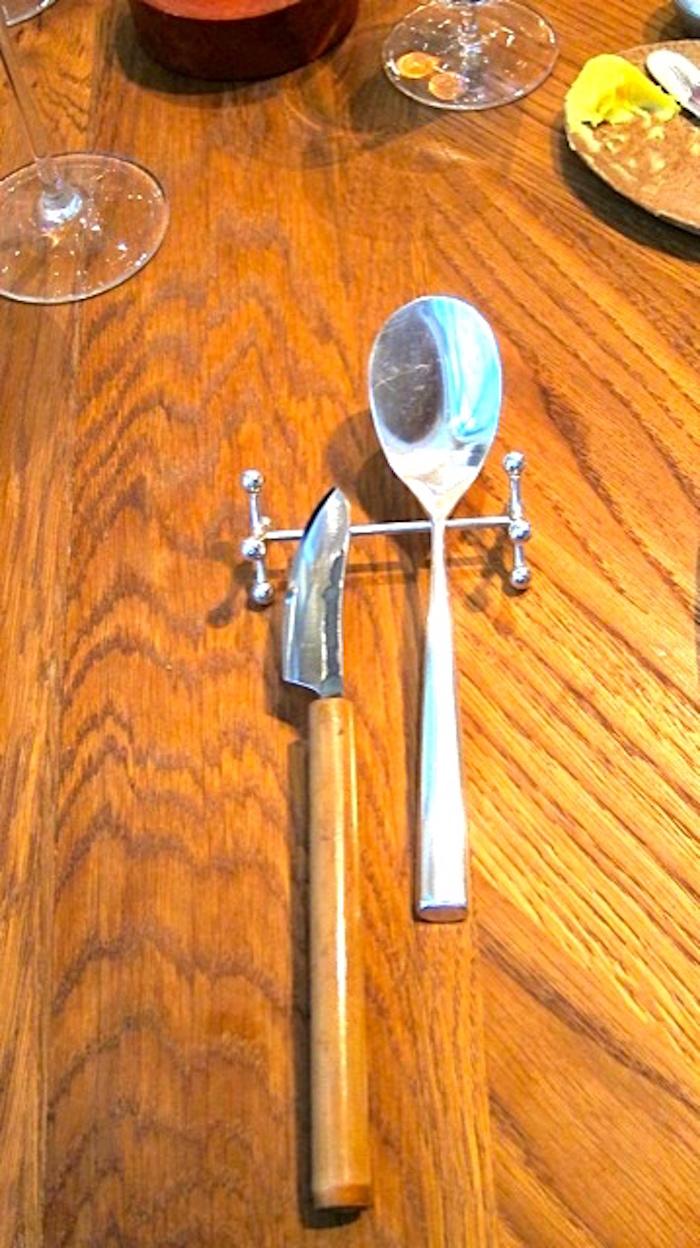 An odd couple, resting on a holder reminiscent of the childhood game “jacks”

Consider the tableware ensemble used for this great dish of daurade, with the creamiest, but most chick-pea driven “hommos” you’ve ever had: 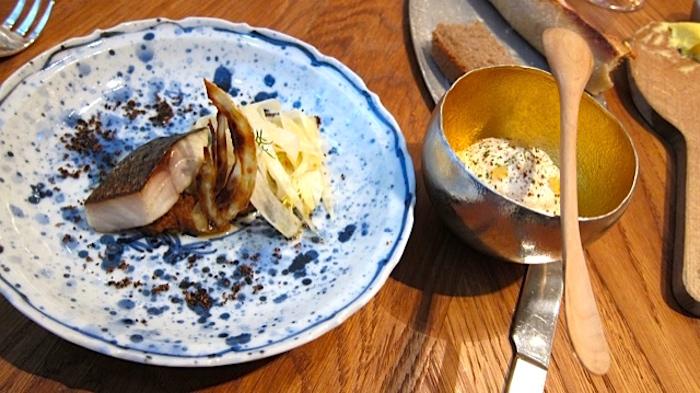 Rustic china on the left, dappled with blue, as the Danes might do? Thin, gold-interior bowl on the right, as the Japanese might do?

And just when you’re getting used to the multiculturalism of it all, out comes the guy to shave fresh, in-season truffles on your brioche of cauliflower with scallops: 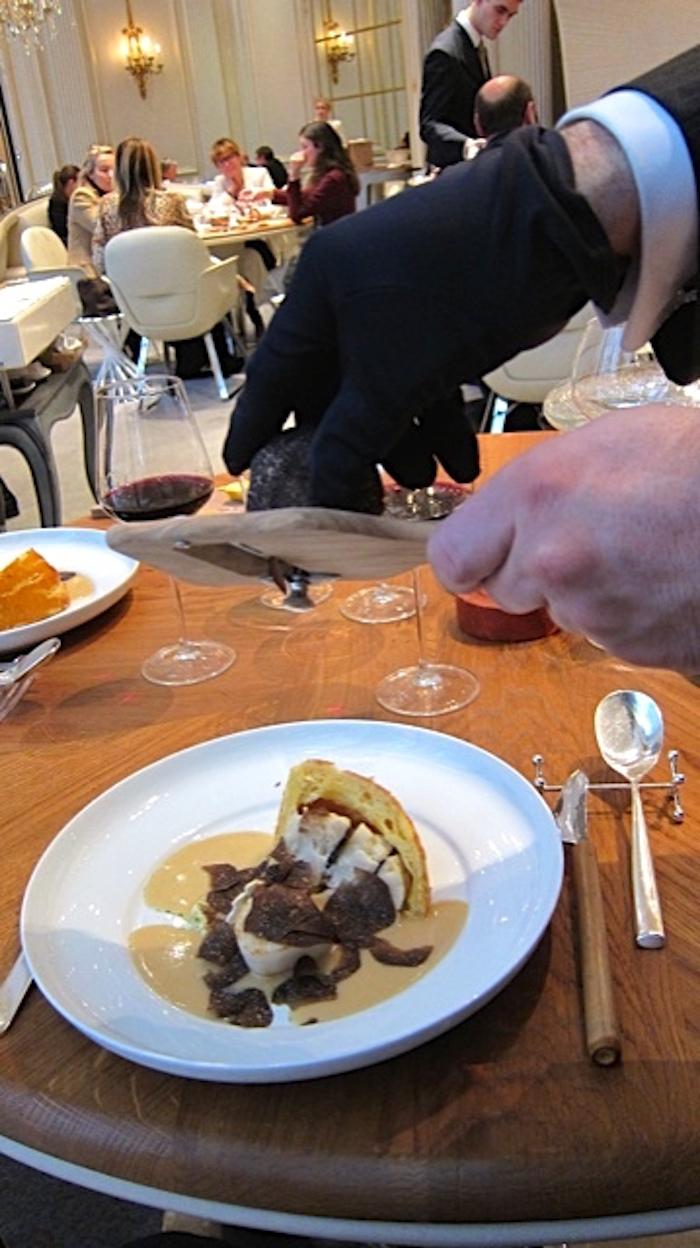 So if this new Alain Ducasse is all about level-crashing juxtaposition, what is it about food-wise?

Oh, he’s all over this. For the answer is…more of the same!

However, Ducasse—long a connoisseur of ingredients and cooking ideas from all over the world—is smart enough to avoid a simple toss-up of multi-culti, fusion-y elements. When he combines things here, every dish with the modern mesh is organized, conceptualized, functioning as an artistic whole on many levels. 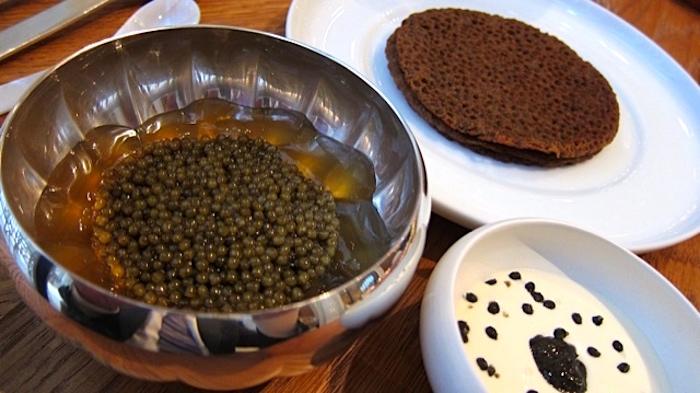 A prime example is the amazing ensemble that you may think of, at first glance, as caviar with blini.

But it ain’t, of course.

And no, these are not Adria-style calcium-chloride balls of something caviar-like. These taste much better than that! They are France’s best lentils, looking for all the world like osetra caviar, cooked in a smoked haddock broth, served, cunningly, in a finger bowl with a gelée of smoked haddock. Alongside them is a wide cup of extra-rich Normandy cream, dotted with actual caviar (pressed). Then the “blini” is made with one of the northwest’s favorite grains, buckwheat, and formed in such a way that even the pancake appears to have caviar-like rounds in it. 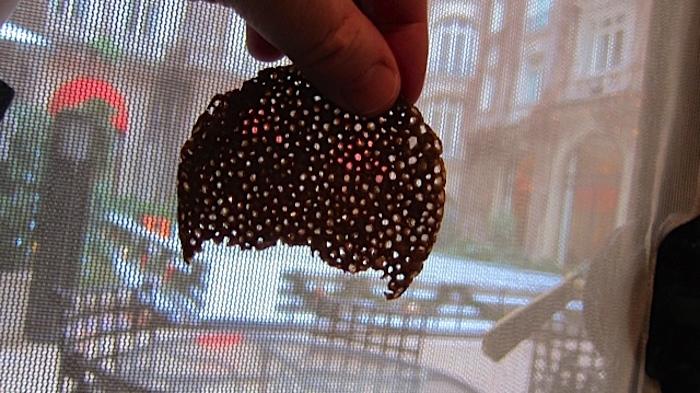 The buckwheat blini against the classic Plaza-Athenée background

The perfect demonstration is Ducasse’s rouget, which was strongly recommended by the wise, gracious waiter. I didn’t feel like a simple piece of fish, even though it was destined to be one of my favorite Mediterranean fish, the red-skinned red mullet. But I bought in…and I’m ecstatic that I did. For on my plate was the best fish dish of the year, done with unprecedented technical skill. 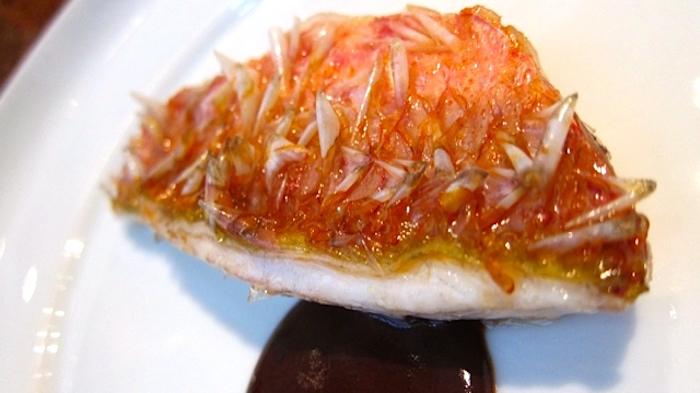 When chefs are “creatively” fusing their soy sauce and butter, I usually sneer. But this is the kind of kitchen creativity I laud: a discovery of a method that makes something old even better as something new. You may have had rouget with a crisped skin…but you’ve never had anything like this! Ducasse provokes the scales of the filet, infusing them with oil, so they stand up on edge…before crisping them so that they’re like chips attached to the fish. It is an extraordinary trick…and perfectly in line with the reigning concept of the otherwise “ordinary” being turned into “magic” by a master.

How can it be that Michelin ignored all of this, refused this thrilling experience acceptance into the “three-star club”? It is not, of course, unprecendented for Michelin to heap three on something offbeat; I think of Chef’s Table at Brooklyn Fare, my favorite American three-star, which features an oval bar holding only 18 diners in front of a small kitchen staff laboring in a tiny, warehouse-like space. Maybe that concept is SO FAR from classic three-star that Michelin felt they could shock the world without rocking the boat. Perhaps Ducasse’s concept is too subtle—or looks too much like a try at elegance that failed. It is nothing of the kind. If Ducasse wants to be elegant, he can be elegant.

What Ducasse wants to be here, I believe, is a beam of light, pointing the way to the “three-star-ness” of the future. What Ducasse is discovering here is the way to construct a 2015 three-star that does not depend on 1915 clichés. Yes, others have done this before…but not in this way, not with such a clear view of what will make the highest-level restaurant experience in the real world of the 21st century.