Before you know it—in June—people will start throwing rice.

Cool, if you’ve got a matrimonial couple in your midst. But what I recommend in May, for everyone, right now—is eating it! Rice is a perfect springtime main course: substantial, but not winter-weight.

To help you pick, here’s the long and the short of the world’s five greatest rice dishes:

Once upon a time, I was completely confused by biryani—which I now realize is one of India’s most magnificent dishes. I was confused because the Indian restaurants I frequented in New York always served a big platter of fluffy, saffron-scented pulao rice with whatever main courses you ordered. Not biryani, just a side dish. Now, one of the main courses you could order was biryani, a main-course rice dish. Maybe it was a chicken biryani…but all that got you was a few stingy, dried-out pieces of chicken mixed in with your rice. It didn’t offer much more than the very minor protein addition; it seemed redundant, and a terrible waste of 12 bucks or so. What I wanted was a lamb vindaloo, a chicken Madras, a shrimp korma to go with my side-dish pulao rice! Not another rice dish! 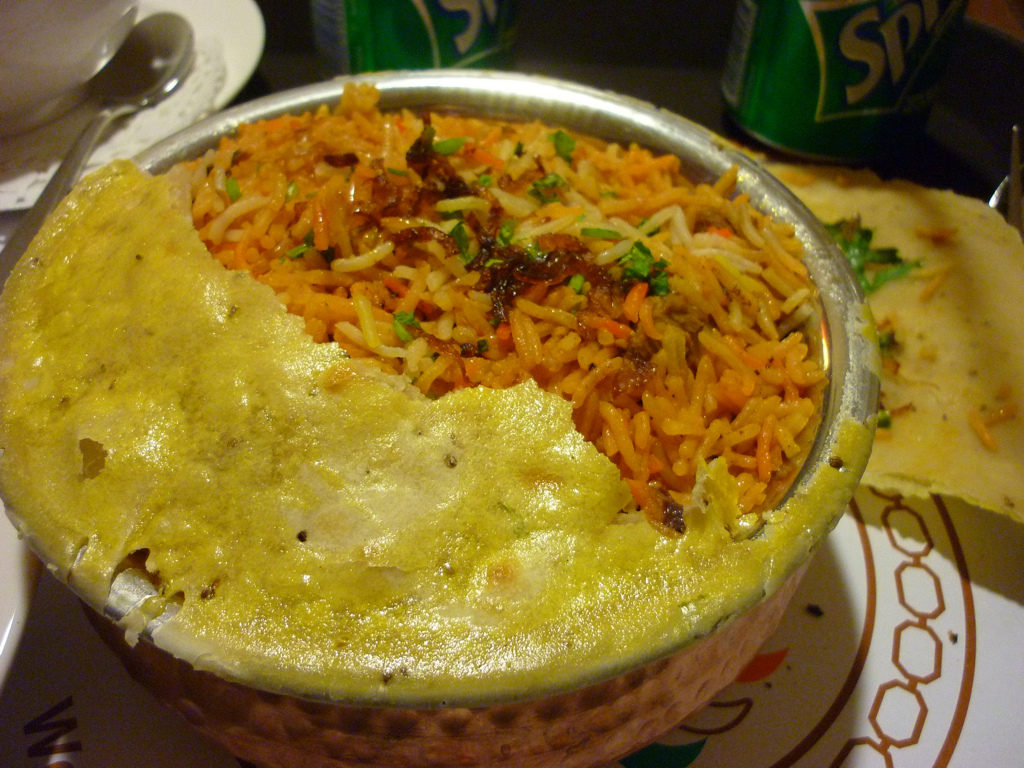 What I didn’t realize was: these “biryanis” I was rejecting in those restaurants were merely New York restaurant biryanis of the 1960s and 1970s. Not good. Not authentic. As I discovered much later, in numerous trips to India, a proper biryani is a thing of glory. It’s nothing like a toss-off side dish. It is a sumptuous banquet dish, fully worthy of appearing as a main course. Even the huge crocks in which biryani cooks in India have a ceremonial aspect: they are sealed with an Indian luting paste, keeping all the wildly-flavored vapors inside (the famous dum cooking). And what flavors there are! A good biryani uses excellent basmati rice, perhaps the super-long-grained Dehra Dun from near the Himalayas; these grains look almost like short pasta! Moreover, the top-grade rice has lots of flavor itself, striking the nose as milky, and a little saffron-y. Then there are the layers of spices—a good 15 of them, as in so many Indian dishes. A classic protein for biryani—especially the great one from Hyderabad, in central India—is goat, marinated in yogurt. Most important of all are the onions: tons of rings, sautéed first in oil or ghee, until they are dark, dark brown. The total effect is hypnotic in its flavor, completely seductive in its richness.

Within the next few weeks, I will dig up a biryani recipe I was shown by a chef in Hyderabad…one of my favorite party dishes of all time!

WINE CHOICE: I like to drink high-acid, medium-bodied, dry Riesling with biryani, preferably from Germany—it cuts through the richness of biryani beautifully! 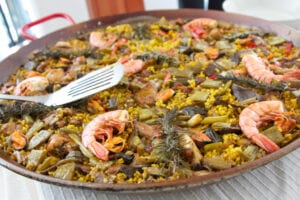 Well, the whole world knows this dish, but few people have tasted a truly authentic version! The dish was created by medieval Moors in Spain, in the northeast corner (in rice country near Valencia)…and if Muslims invented it, how could it include pork sausage and shellfish? It didn’t. An authentic Paella Valenciana still doesn’t. The original had rabbit, snails, string beans, and two kinds of beans; if you’re in Valencia, seek it out. The only problem is…most restaurants in Valencia serve what the tourists expect paella to be, with chorizo, shrimp, clams, mussels and chicken. There’s a theory that the great English food writer started writing about this kind of paella in the 1950s—she didn’t know Spain as well as she knew France—and that English-speaking visitors to Spain have asked for it ever since. The other very authentic aspect of paella that rarely gets reproduced today, even in Valencia—is cooking the dish over an open fire, which, by tradition, includes orange-tree wood and vine cuttings. Usually by the men of the family…on Sunday afternoon. Oh yes, and then there’s the rice! It must be short-grained, not unlike the Italian risotto rices. But it has become fashionable to focus on one Spanish short-grained rice: bomba, which is available in gourmet stores all over the world. Here’s another paella surprise: to the best paella chefs in Valencia, bomba doesn’t cut it. “Bomba…is plastic!” one of them told me, frustrated that bomba rice doesn’t absorb flavors well. The best chefs there use different varieties of local rice not available anywhere else. Hie thee to Valencia!

Well, this is usually served as a side dish in Louisiana, or as a stuffing, but I love it so much I could make a main course out of it anytime! The thing about it that’s so great is the funk, which comes from cooking the rice together with chicken livers and, possibly, gizzards. Of course the “holy trinity” is at the base—onions, celery, green peppers—and good cooks are liberal with the Cajun spices. You’ll find it all over the South, but don’t let a lifetime go by without having it in the Bayou! By the way…the rice itself, intriguingly, doesn’t matter so much in this dish! I’m not gonna tell you you’ve got to get bomba, or vialone nano, or basmati…or any rice in particular! What most cooks use down south is your basic supermarket rice, like Carolina or Uncle Ben’s! Dirty rice is a different kind of cooking proposition from the others: the rice doesn’t get cooked from its raw stage along with everything else. In this case, cooked white rice is added to the casserole! But it still surges to greatness.

WINE CHOICE: I’m pretty sure that in the Bayou they’re throwing back local beer with this dish; I’d be happy to do that too. But I do know from experience that a light Pinot Noir, with some age and funk, goes beautifully with Cajun Dirty Rice! I have often drunk the wonderful Philipp Kuhn Spätburgunder from the Pfalz in Germany with this dish. 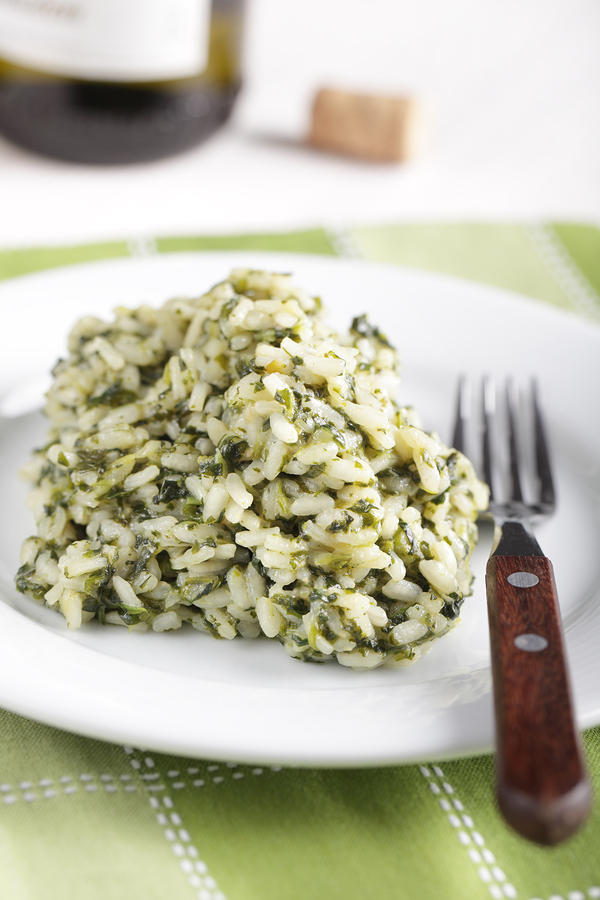 One of the world’s most unusual rice-cooking methods is this crazy great thing cooked up by the Italians. Sure, most of the world likes its rice fluffy—but not the Italians! They like it creamy! And, man oh man…come at that thing with a big spoon, and you’ll be purring “mama” after just a few bites. Of course, the flavor is a treat as well as the texture—if you’ve selected the right ingredients to go into the risotto. I love all kinds of vegetable risotto—cauliflower, asparagus and mushrooms are among my favorites. Then comes that amazing hit of butter—lots of it!—and Parmigiano-Reggiano added at the end, to “mount” it. Risotto is beloved in northern Italy especially, from whence the major risotto rices come, all of them short-grained. But choose carefully! The one most people select is arborio, a superfino rice, which I think is just OK. I think the texture of your risotto is better if you find a bag of carnaroli, also a northern superfino. But best of all, without doubt, is vialone nano, a semi-fino, which means it has less external starch. Superb! After it cooks, the liquid in which it’s suspended is runnier, less thickened than the arborio liquid. That’s why around Verona they say that a vialone nano risotto is all’onda—like waves of liquid coming at you, not sludge piles.

WINE CHOICE: It’d be great to find a gorgeous Italian white to go with risotto: medium-bodied, dry, with some character to it. It ain’t so easy, though a good Soave occasionally rings the chimes. I find Chablis to be much more reliable—village Chablis, even good Petit Chablis.

On my constant New York restaurant itinerary is…Dominican food! Every month or so, I gotta get me to a Dominican place for rotisserie chicken, rice, beans, plantanos, etc. But one of my favorite Dominican dishes of all is asopao, soupy rice…particularly the one made with shrimp.

Truth be told: it’s not a dish owned by cooks from the Dominican Republic. Many food historians believe that it’s based on a soupy rice created centuries ago in Portugal—though there are the paella theorists, and the gumbo theorists as well. Today, you can find great versions in Cuba (a fairly elaborate affair, with chicken, ham, olives, avocado); in Puerto Rico (where chorizo and shellfish often come together); and Colombia (where they flavor it with cumin, scallions, chiles and annatto).

ln my tasting experience, the Dominicans win this round. If you’re in New York City, check out El Malecon on Amsterdam Avenue.

WINE CHOICE: Frankly, I’m not sure what they drink in the Dominican Republic. But for me, at El Malecon, it’s always sangria, red! If you’re making the sangria at home, use a full-bodied young red, but not a tannic one.