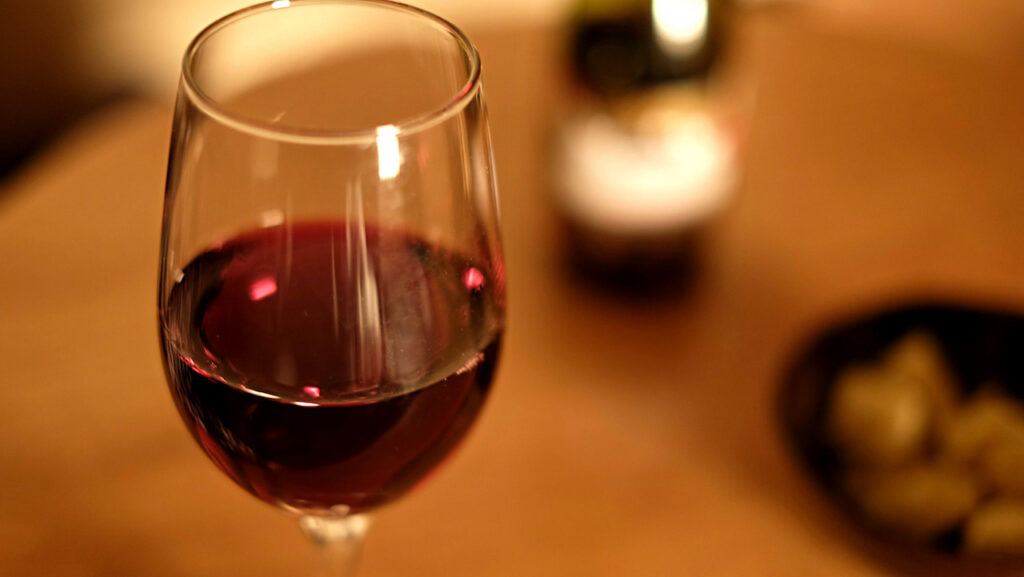 One of the many signs of the holiday season in the world of wine is the annual release of France’s Beaujolais Nouveau, a ripe fruity red wine made from the indigenous Gamay grape grown in Beaujolais, a 34-mile region of France running north to south in Burgundy.

Beaujolais Nouveau signals the end of the harvest and a celebration of the bounty of autumn. The words Beaujolais Nouveau est Arrivé heralds the arrival of this wine with the fanfare of a newborn child, albeit this one with a set due date. French law requires that Beaujolais Nouveau be released at 12:01 AM the third Thursday in November. No exceptions. That’s roughly six to eight weeks after harvest.

Throughout the world, Beaujolais Nouveau arrival parties take place after the stroke of midnight on this designated day. Some are rather raucous intended for the perfect photo opportunity. Picture a group of wine lovers holding their glasses high in a bath of Beaujolais Nouveau, or an aerialist lowering a bottle of Nouveau from a trapeze, or a case of wine delivered by motorcycle brigade. When the Concorde was still flying, cases of Nouveau were jetted to the USA to make the midnight deadline. 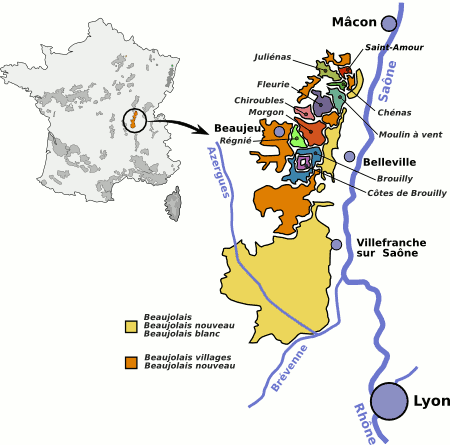 No other wine in the world is released with such pomp, especially one that averages just $11.99 a bottle. And no other vintner has been as closely associated with the tradition of Beaujolais Nouveau as Georges Duboeuf who first brought Nouveau to the USA in 1982. Georges Duboeuf founded Les Vins George Duboeuf in 1964. Working as a négociant, he traveled village to village on his bicycle to promote and sell his wines. Now in his 80s, Duboeuf is still traveling – by jet – to spread the word about Beaujolais wines around the world. He works side by side with son Franck to oversee a company that works closely with over 400 wine growers in the Beaujolais region alone.

This year, Georges was in Japan to uncork the first bottles of Beaujolais Nouveau where its arrival is practically a national celebration. Franck visited New York to host a quieter Nouveau dinner at Bouley Botanical prepared by Michelin star Chef Daniel Eddy of Rebelle. Franck noted that 2016 provided ideal hot, dry summer growing conditions following a rainy spring, resulting in wine with an even more generous burst of fruit on the nose and palate including cherry, strawberry, blackberry, and a hint of white peach.

The vinification process for Nouveau is called “carbonic maceration” which means the whole, hand-harvested Gamay grapes are fermented in a sealed vessel filled with carbon dioxide prior to crushing. The process breaks down the enzymes in grapes naturally to convert the sugars into alcohol. The result is a wine low in both tannins and in alcohol (average 10.5% ABV). Nouveau is a wine to drink while it’s young, preferably slightly chilled (62-65°F).

Many people consider Beaujolais Nouveau a holiday wine in part due to the timing of its release but also because it’s a festive, easy-to-drink, inexpensive wine for many types of holiday gatherings, from casual brunches to roast turkey to soup and sandwiches. While there are dozens of notable Beaujolais producers, Georges Duboeuf is the most well-known name and the top selling brand of Beaujolais. A nice holiday hostess gift is a basket or box of assorted Nouveau wines with a fresh baguette and French cheeses.