Who doesn’t love hot buttered rum for the holidays? I grew up loving the stuff. I used to sneak spoonfuls of this magic batter into my mouth as a kid. This recipe is my twist on what my mom made every year for Christmas. Be sure to add plenty of batter and rum into each serving (I double the recipe for both). It’s the only way.

In a large pot over medium heat, melt butter. Blend in the sugars. Remove from heat and stir in the ice cream, cinnamon, and nutmeg.

Pour mixture into a freezer-safe container and cover with a lid. Freeze until ready to use.

May be kept frozen for up to 1 month (batter will not freeze solid).

In a mug add batter, rum, and fill with boiling water. Stir well. Sprinkle with nutmeg and serve with a cinnamon stick. 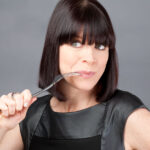 Carole Mac is an author, producer, and host of all things food and wine. Her bestselling children’s book The Gift of the Ladybug was inspired by her dearly departed son TJ and has raised over $25K for children with life-threatening illness; her food film Oh My Rødgrød! was selected to appear in the NYC, Chicago and Devour Food Film Festivals; she has regular columns in Lapalme and Retreat magazines; and her latest series Somm School Insider appears on Wine4Food.com, Apple TV, Amazon Fire TV, BINGE Networks, and ROKU. She has been featured on ABC, CBS, NBC, USA TODAY, GLAMOUR SA, and Thrive Global. When she isn’t eating, drinking, or filming, she enjoys being active in the outdoors, cycling, hanging with family and friends, and hunting down the best bites and sips in New York City. Follow her adventures at CaroleMac.com and @Carole.Mac.